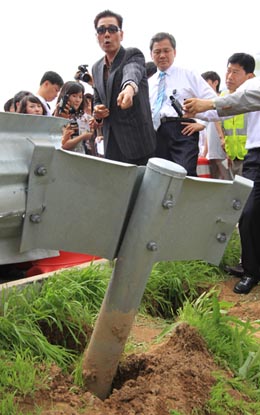 A relative of one of the victims in the bus crash on Incheon Bridge points at a torn guardrail during the police’s inspection on Sunday. [YONHAP]

Police investigating the deadly bus crash that killed 12 passengers on their way to the international airport are looking into the possibility that a guardrail on the Incheon Bridge might have been faulty and contributed to the death toll.

“We will soon conduct an on-site inspection to measure the length of guardrails after we complete our questioning of the construction company officials,” said Lee Su-beom, an investigator in charge of the case.

Police submitted a guardrail sample to the National Institute of Scientific Investigation to determine whether it was built properly.

Police will today conduct a joint on-site investigation with the Ministry of Land, Transport and Maritime Affairs and the Road Traffic Authority. People responsible for the construction will be booked if authorities reach the conclusion that the guardrail was built poorly, Lee said.

Police said a 1.3 meter (4.3 feet) section of the 2.1 meter guardrail was buried beneath the bus after it collided with a Daewoo Matiz stalled in the middle of the three-lane highway and careened 10 meters off the bridge.

Police said Kim didn’t put a reflective warning tripod 100 meters behind her car on the highway after it stalled, and that Jeong failed to maintain a safe distance on the road. They also said Jeong was driving at 100 kilometers per hour.

Lee Jae-man, an official with the Ministry of Land, Transport and Maritime Affairs, said the ministry launched a separate investigation to find out whether “the guardrails on the bridge were built properly in accordance with blueprints.”

“If the guardrail was built strong enough, our family and relatives would’ve survived,” Hwang Byeong-won, the leader of the bereaved family members, said. “The Incheon City government should take responsibility for the accident and actively support the bereaved families,” he said.