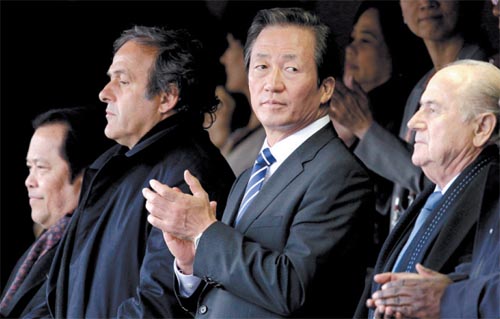 
JOHANNESBURG - Chung Mong-joon, a vice president of FIFA, said Monday that he will do his best to bring South Korea the rights to host the 2022 World Cup, although he acknowledged competition would be fierce.

Korea is competing against the United States, Australia, Japan and Qatar for the rights to the 2022 tournament, hoping to host the games for the first time on its own, after co-hosting the 2002 event with Japan.

“I know it’s very difficult to win the bid against strong competitors, but I think it’s worth doing for the nation,” Chung said.

A businessman-turned-lawmaker, Chung has coupled his attendance at the South African World Cup with the promotion of Korea as a future host city. “I keep telling FIFA executive members that the World Cup in Korea can contribute to peace on the Korean Peninsula.”

FIFA is scheduled to select the host nations for both the 2018 and 2022 tournaments in December.

A European country is virtually guaranteed of being chosen for the 2018 event, while non-European and non-South American countries - the U.S., Australia, Qatar, Korea and Japan - are expected to compete for the 2022 event. Brazil is the host for 2014.

Chung hailed the first World Cup hosted on African soil as one of the most successful tournaments.

“(South African) President Jacob Zuma once said ‘South Africa proved everybody wrong,’ and I really agree with him,” said Chung.

He also stressed that young and potential players in Korea should be exempted from the two-year military service so that they can continue to develop their careers without disruption, which would in turn raise the country’s competitiveness in the sport.

Captain Park Ji-sung was exempted from military duty after a special law was passed following his team’s advancement to the semifinals at the 2002 World Cup. He was then recruited by top clubs, including Manchester United, for which he currently plays.

But the issue is very controversial in Korea, where some critics say the proposed exemptions should also apply to athletes in less glamorous sports who win international championships overseas.

The 2002 special law was later scrapped amid negative public backlash.

Under the current law, only Olympic medalists and Asian Game gold medalists are exempted.

“I’m not demanding that we give footballers a privilege. I just want you to take consideration of these young players and invest in them. Potential players should be given chances to go abroad and improve their football skills there,” he said. “I know the issue is in the hands of the government and the people.”

Chung did not have a chance to meet people from North Korea, whose team qualified for the World Cup finals for the first time in 44 years.

The North Koreans appeared “rather ill at ease,” he said. “I didn’t think of seeking them separately.”

He said that an inter-Korean match was planned before the South African World Cup, but was canceled after Pyongyang was found responsible for the sinking of a South Korean warship in March that killed 46 sailors.

“We were trying to hold a friendly with North Korea before we headed to South Africa. We had received government approval, and North Korea was positive about it,” he said. “But the plan was scrapped after the incident.”