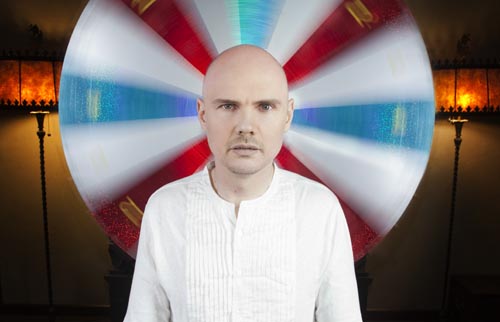 Vocalist Billy Cogan of the band Smashing Pumpkins comes to Korea for a concert on Aug. 14. See MUSIC, below. Provided by Access Entertainment

Sunday: This is the second concert by the Virus band after last year’s performance of “Beethoven Virus.” While the 2009 show focused on the classical genre, Sunday’s “Jazz Virus” mixes both jazz and classical music to appeal to a wider audience.

Saxophonist Danny Jung, jazz pianist Gwak Yoon-chan, popera tenor Kang Shin-ju, soprano Kang Hye-jung and many others will be performing. Also, composer Seo Hee-tae will host a lecture on the music to help the audience better appreciate both jazz and the classics.

Known the world over for their unique treble voices, the choir is celebrating its 51st year of existence this year. Their repertoire includes pieces from everyone from Bach to Stravinsky to Andrew Lloyd Webber.

July 14: The Laurel Wind Orchestra of Korea is holding a concert entitled “Slavyanskaya.”

The concert will include pieces by famous Russian composers such as Mikhail Glinka, Aleksandr Borodin and Pyotr Ilyich Tchaikovsky.

A highlight of the performance will be the orchestra’s interpretation of Tchaikovsky’s “Romeo and Juliet Fantasy Overture.”

July 15: Young artists from Korea and Japan come together for this concert, conducted by Kentaro Kawase and featuring pianist Tae-Hyung Kim.

Kawase has studied under Junichi Hirokami and Chung Myung-whun and placed second in the Tokyo International Music Competition for conducting in 2006. Tae-Hyung Kim was named the New Artist of the Year by the Music Association of Korea in 2004, among other awards. The orchestra will play Beethoven’s Symphony No. 7 in A major, Op. 92 and Kim will play Beethoven’s Coriolan Overture, Op. 62 and Piano Concerto No. 4 in G Major, Op. 58.

July 30 to July 31: The Seoul Metropolitan Youth Orchestra is holding a series of concerts so that parents and children can enjoy time together listening to classical music as summer vacation season has started.

Announcer Oh Sang-jin will explain what instruments are being played, the history of the music performed and the proper etiquette to follow at concerts.

Aug. 14: Smashing Pumpkins came out of Chicago in 1988 and went on to become one of the great alternative rock bands of the 1990s.

Their most recent album, “Teargarden by Kaleidyscope,” was released in December and they are currently on tour to promote it.

Aug. 18: To commemorate the 20th anniversary of Leonard Bernstein’s death, The Leonard Bernstein Office, Inc. is holding this concert in Korea to introduce Bernstein’s music to Korean young people. The conductor Seo Hee-tae, a music director of the MBC drama “Beethoven Virus,” will lead the concert.

To July 18: The first opera of the “My First Opera” series promoted by the Korea National Opera in 2010 targets families with children to enjoy opera together. The KNO incorporates cartoonish elements in the opera with animated characters to make opera more interesting and fun for youngsters.

To Aug. 29: This world-renowned musical with a 38-year history will be the first musical performed at Times Square, one of the biggest shopping complexes nationwide.

Kim San-ho, a rising star in the musical industry will play the tough greaser Danny. Kim has been playing that role since 2006 in various productions of the musical. Former model and musical newbie Lee Eun-hyung will alternate with Kim to play Danny.

To Sept. 12: Many famous actors including Kim Jung-hwa and Kim Hyo-jin have come together to put on this play.

Based on Sam Shepard’s 1983 “Fool for Love,” the play follows the relationship of two lovers, who happen to be half-siblings and the struggles they face.

The award-winning Cho Gwang-hwa will direct the play.

Monday to July 25: This performance reveals the conflict between individual needs and wants and the things society demands of us.

The main character Jung-hye, who wants to be noticed and loved, takes a trip wearing a pair of red shoes. In the course of her journey, she meets a variety of people who are greedy and vain. As she travels, she gains a better understanding of human nature and what she wants from life.

THE STORY OF MY LIFE

Tuesday to Sept. 19: Adapted from Neil Bartram’s 2006 musical of the same name, “The Story of My Life” is coming to Korea for the first time. Popular musical actors Ryu Jung-han and Lee Suk-jun will appear as the main characters.

The musical tells the story of the friendship between two men from age six to 35. By exploring their friendship, the director will reveal the authentic and meaningful connections we make with others throughout our life.

Performances begin at 8 p.m. on weekdays, at 3 p.m. and 7 p.m. on Saturdays and at 4 p.m. on Sundays. There will be no performances on Mondays.

July 25: This performance features the mask dance “Gangryung Talchoom,” which originated from the Hwanghae region of Korea. The dance is famous for its elegant and delicate movements. It is listed as the 34th important intangible cultural heritage.

Today to July 19: Seodong was a prince of the Baekje Kingdom who became King Mu, the 30th monarch of the kingdom. The Seodong Lotus Festival is held around the Gungnamji Pond, which bears the legend of Seodong’s birth. Programs include a night parade, performances of traditional music and dance, experiences of Baekje culture and a photo contest against the backdrop of picturesque lotus blossoms.

From Seoul, take a bus to Buyo from Seoul Nambu Bus Terminal.

July 23 to 27: Hamyang is a major production base of wild ginseng at the foot of Mount Jiri, and is particularly famous because the land is rich in germanium, a metalloid element. The festival’s offerings include academic symposiums, exhibitions and a marathon. Visitors can also tour a wild ginseng plantation and purchase herb and mud packs containing germanium.

From Seoul, take a bus to Hamyang from Seoul Nambu Bus Terminal.

July 3 to Aug. 15: The Haso Baekryon (White Lotus) Festival offers various sights and activities near the 66,000-square-meter (710,420-square-foot) Baekryeonji Pond, where white lotuses will be in bloom. Visitors can watch performances of Korean traditional music and dance, participate in folk games, and view exhibitions of stone tiles, photos, calligraphy and Buddhist paintings. Visitors will also be able to taste and buy baekryon tea made of green tea and white lotus leaves.

From Seoul, take a bus to Kimje from Seoul Express Bus Terminal.

July 23 to 26: Colorful fireworks will embroider the sky over Pohang in this festival. Fireworks companies from Canada, Poland, Japan and South Korea will display their products in the summer sky. Visitors can also attend performances of music and dance, a singing competition and movie screenings.