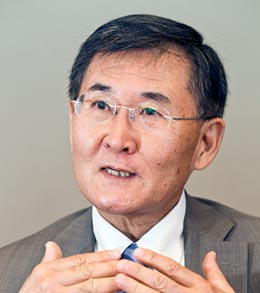 Steve Kang, the chancellor of the University of California at Merced, offered advice to Korean universities on how to increase their competitiveness during a recent visit to Korea, when he delivered a special lecture at the Korean Federation of Science and Technology Societies and finalized plans for a student exchange program with Dankook University.

Kang became the first Korean to lead a university in the United States when he became chancellor of UC Merced in March 2007. At the time, the university was facing various challenges: the vice chancellor had suddenly resigned, and the university could not fill all of its available space for students. However, in only a few years, Kang has managed to dramatically increase student enrollment, and the university received a sudden spike in attention last year when Michelle Obama gave the commencement address.

Before accepting the position at Merced, Kang was head of the electrical and computer engineering department at the University of Illinois at Urbana-Champaign, and the dean of the school of engineering at UC Santa Cruz.

In an exclusive interview with the JoongAng Ilbo on Sunday, Kang shared some of his experiences at UC Merced and his thoughts on how to improve the competitiveness of Korean universities.

A. UC Merced is the tenth campus of the University of California. It became the newest campus in the UC system when it opened in 2005 with 830 students. Due to financial difficulties, it took 10 years for the school to actually open after the plan for its establishment was finalized. UC Merced is strong in environmental studies, cognitive science and multi-cultural studies. We are planning to open a medical school soon, so we are also focusing a lot on health-related fields and bioscience.

How did you attract more students to UC Merced when students were transferring to other schools?

As soon as I became the chancellor, I initiated a 100-day campaign, during which I visited students, professors and those who live near the campus to talk with them in person. I persuaded current students to stay and listened to their thoughts on the university. When I talked to the professors, I tried hard to encourage them to stay positive and boost their morale. I also personally visited neighborhoods to persuade high school students there to apply to UC Merced. After a while, I guess they were touched by my efforts and hard work. The application pool increased and the morale among professors was high again.

Do you have any suggestions to improve the competitiveness of Korean universities?

The faculty evaluation system in which professors assess their fellow professors should be actively adopted in Korea. In the United States, faculty evaluations are given great weight when making tenure decisions and promotions. As a result, there is fierce competition among professors, and universities have a lot to gain from it. It is extremely difficult to attain tenure in the U.S., and Korean universities also need to push professors a lot harder than they do now.

Also, it is important for Korean universities to find and develop their own unique strengths, rather than merely following in the footsteps of other more successful universities. Innovation is the key. Whenever people try something new for the first time, it is natural for them to be scared and nervous. However, as Alexander Graham Bell said, when you are walking in a forest, if you only follow the road that is already there, you can never discover something new. You have to make your own way to innovation.

The last thing I would like to say is that Korean universities should take an interdisciplinary approach. For example, some professors ask how they can improve their chemistry departments, but it is already too late if you approach the question this way. Every discipline is connected in one way or another. Something new and unique can be created when you bring together seemingly unrelated disciplines.

There is also some criticism that professors are concerned too much with their research, so they care less about teaching.

Those professors are not qualified for tenure. To receive tenure, professors need to excel in both research and teaching. I remember an instance when a panel of judges that was evaluating tenure candidates voted unanimously to provide tenure to one professor who had a great research record, but not a great teaching one. I voted against the offer though because the major purpose of a university is education, and those who are not good at it have no place.

How much weight should be given to student evaluations of the faculty?

What are your thoughts on leading a university?

A man who had been a senator, state governor and a university president once said that leading a university was the most difficult thing he had ever had to do. Because professors are very independent, you have to be careful about pushing ahead with your own ideas. A more charismatic leadership style may be effective in a company, but not at a university. The most important aspect is determining when to take action and when not to. If you force your ideas too much, the professors will not follow you. But if you keep waiting, you will miss opportunities. Knowing when to make a move is an art form.

I would also like to stress that modesty is the most important virtue for the president of a university. Just because I am the chancellor of UC Merced does not mean that I need to single-handedly come up with ideas and make every decision. My job is to help those around me make use of their talents and realize their abilities to the fullest. I am only the official cheerleader for UC Merced, so I should be humble and modest to do that best.