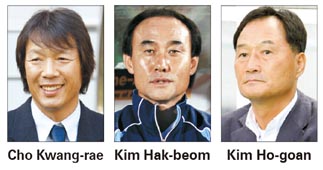 The Korea Football Association’s technical committee officially started their search for a replacement for Huh Jung-moo as manager of the national football team at a meeting yesterday afternoon. The committee is expected to meet again on July 13.

With Olympic team manager Hong Myung-bo and 2010 World Cup squad assistant coach Chung Hae-soung reluctant to take the job, the race between the other candidates is heating up. The new manager will take the team to the Asian Cup in January in Qatar.

Here are the top domestic candidates:

Huh Jung-moo’s teammate at the 1986 Mexico World Cup, Cho started his coaching career with the Daewoo Royals in 1992 and had stints with the Suwon Bluewings and FC Seoul. Cho is known for having a sharp eye for young talent and is credited with discovering current national team members Lee Chung-yong and Ki Sung-yueng during his stay with FC Seoul. This season, Cho led his Gyeongnam FC squad to fifth place in the 15-team K-League with a core group of young and talented players in their rookie or sophomore seasons. As one of the top managers in the K-League, managing the national football team would be seen as Cho’s final challenge before retirement.

Drawbacks: His close relationship to Huh Seung-pyo, who competed with Chung Mong-joon and Cho Jeung-yeon for the KFA presidency, could work against him.

Kim is known for his work ethic and has a reputation for thorough preparation. After resigning from his post as the manager of the Seongnam Ilhwa in 2008, Kim traveled to Japan, China, Brazil, England, the Netherlands and other countries to hone his coaching skills. Kim is credited with organizing the first stable four-man defensive line in Korean professional football. This could be a big plus for the national team, which has a weak defense.

Drawbacks: Kim has failed to form a strong relationship with the KFA in the past. His relatively low-profile professional career could also work against him.

Kim is the most experienced of the candidates. He coached the 1986 Mexico World Cup squad and the 1992 Barcelona Olympic team and managed the 2004 Athens Olympic team. Kim has led his Ulsan squad to top of the K-League standings this season with the record of seven wins, three draws and two losses.

Kim has been the managing director of the KFA since 2005.

Drawbacks: Although Ulsan sits atop the K-League standings, their performance on the field has been less than impressive.