The artery of South Korea

The artery of South Korea 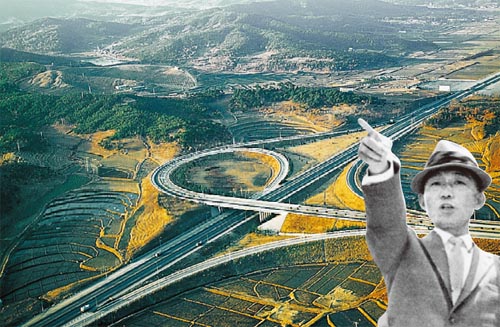 It has been 40 years since the 428-kilometer (266-mile) Gyeongbu Expressway, which diagonally cuts across Korea connecting Seoul and Busan, was completed in 1970. It took two years and five months to build and was an unprecedented, monumental engineering project, with 305 bridges, 12 tunnels and 19 interchanges.

Sixteen private construction companies and three units of military engineers were involved in the construction, for a total of 8.9 million people and 1.65 million pieces of equipment.

The cost to the government was just under 43 billion won ($35 million), which was equivalent to 23.6 percent of the annual budget at the time. The government received no foreign aid and took out no loans to fund it. Considering Korea’s GDP per capita was only $142 per person back then, financing the highway was an accomplishment in and of itself. 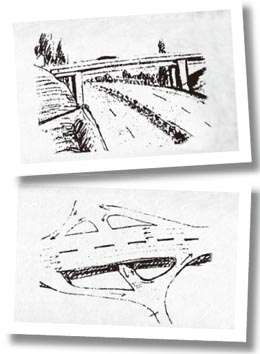 These drawings of the Gyeongbu Expressway were reportedly made by President Park Chung Hee himself, around the year 1968. [JoongAng Ilbo]

On the other hand, not all of the techniques used to speed up construction would be smiled upon in the industry today. Workers intentionally spilled oil on the ground and set fire to it in winter to make it easier for them to work the frozen ground. And after the highway opened, many problems were discovered due to its rushed construction. Just a year after it was completed, some parts of the expressway had to be repaved. According to one government source, it actually cost more to repair the Gyeongbu Expressway over the 10 years after it opened than it had to build it in the first place.

Nonetheless, the Gyeongbu Expressway brought revolutionary changes to Korea. It originally took 15 hours to get to Busan from Seoul by train, but the expressway let people drive between the two cities in just four, essentially shrinking the whole country into a “day trip” zone. The expressway also worked as an economic catalyst, contributing to a boom in the automobile industry and moving industrial components and finished goods across the country more rapidly.

In 1970, in the first year the expressway was open, 3.7 million cars drove on it, and that number had increased tenfold by 1985. Today, 340 million cars per year use the road.

“This expressway is truly a great piece of art we have created with our blood and sweat,” said President Park Chung Hee, who directed every step of construction, at the opening ceremony.

Park first revealed his plans for a transnational highway when he was running for president in 1967. As soon as he was elected, he asked government agencies and private construction companies to calculate approximately how much funding would be needed to build an expressway connecting Seoul and Busan. In November of the same year, each of them came back with numbers, but they differed so much that it was impossible to make an accurate prediction. The estimates ranged from 18 billion won by the city government of Seoul to 65 billion won by the Ministry of Construction. Hyundai Engineering & Construction, the only private firm commissioned, came up with an estimate of 28 billion won.

As it seemed impossible for an agency to determine how much construction should cost, Park set out to calculate it himself. In December 1967, Park convened his own task force of three military engineers - Yun Young-ho, Park Chan-pyo and Bang Dong-sik - and Park Jong-saeng, an official from the Ministry of Construction. The task force met at the Blue House every morning.

“The president called me to the Blue House on Nov. 24. I didn’t know what to do in front of the president, but he asked, ‘Colonel Yun, would you like to build an expressway with me?’ I was very startled at first, but I slowly looked around the room we were in, and one wall was almost completely covered with maps,” said Yun, who was the leader of the task force and is now the CEO of Shin-young Technology. “The first thing the president made me do was to bring maps of Seoul and Suwon of various ratios, from 1:1,000,000 to 1:1,200. I went straight to get those maps. From that day on, I always carried maps everywhere I went.”

As soon as the first assignment was over, Park directed the task force to calculate an estimate for the cost of construction. After careful consideration, Yun reported that 36 billion won would be the closest estimate.

“When he listened to my brief, he asked me back, ‘How about 33 billion?’” said Yun. “He then called Lee Hu-rak, the chief presidential secretary at that time, and ordered him to negotiate with the U.S. Armed Forces in Korea to send a few units of military engineers for the construction project.”

The U.S. Army agreed to send military engineers in return for being allowed to drive on the Gyeongbu Expressway for free after its completion. The support from the military made it possible to complete the construction of the highway so rapidly.

It was also Yun’s responsibility to determine the route of the Gyeongbu Expressway. Yun personally visited sites for the expressway and established routes on the map, reporting back to the president every night.

“On Christmas that year, President Park told me to go to Yangjae-dong and check whether it was appropriate to have the expressway go through the area. I went there and only found patches of rice paddies and farmland. After I investigated the site, I returned to the Blue House. Although it was Christmas night, President Park was still working. After he got my report, he ordered Lee Hu-rak to convene a meeting of ministers the next day, because if the information that the government was going to buy land leaked, its price might rise rapidly.”

One day later, President Park showed the ministers the 32-kilometer route connecting Seoul and Suwon and ordered the mayor of Seoul and the governor of Gyeonggi to buy up the land that would be used for the expressway in the next week. They protested that one week was not enough time to purchase all the land, but the president responded angrily, “The mayor can order chief boroughs and chief boroughs can order lower-ranking officials, and those lower-ranking officials can get agreements from officials at even lower ranks than them. Why is it so difficult to do that?” The purchases went through without a hitch, in seven days.

Yun continued to travel around the country to set the route for the Gyeongbu Expressway. Since the task force had determined it would not follow old roads, Yun sometimes had to climb mountains and cross rivers. When that was not possible, Yun explored by helicopter. At one point, Yun was flying in an L-15 airplane over mountainous terrain between Daejeon and the Chupungnyeong mountain pass when he almost crashed due to bad weather.

After the route was finalized, the date for the groundbreaking ceremony was set. As the date approached, on Jan. 21, 1968, North Korean forces infiltrated the mountain right behind the Blue House, and tension between the two Koreas intensified. However, Park insisted on going ahead with the plan no matter what, barring the outbreak of a second Korean War.

The most difficult part of the construction was reportedly a 70-kilometer section near Daejeon. In Okcheon County, North Chungcheong, there had to be either a tunnel or a bridge every 1.6 kilometers due to the rough terrain. Sometimes even several hundreds of workers could dig only 30 centimeters of tunnel a day. After a while, some of the workers gave up and quit. This section was the last to be completed, on June 27, 1970, and the Gyeongbu Expressway opened on July 7.

Yun said, looking back on his time working to build the expressway, “President Park led the construction of the Gyeongbu Expressway when South Korea’s GDP per capita was lower than that of North Korea. There was also a lot of opposition against the plan. However, the construction of the Gyeongbu Expressway was what planted the seeds of confidence and hope in people’s minds.”