Semenya cleared to race by IAAF after gender verified

Semenya cleared to race by IAAF after gender verified 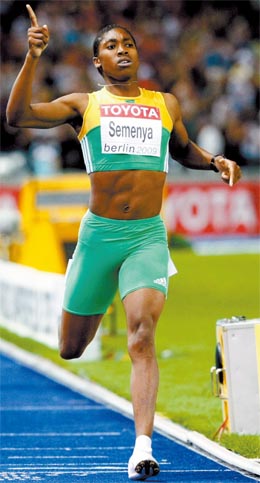 Caster Semenya crosses the finish line to win the gold medal in the final of the Women’s 800m during the World Athletics Championships in Berlin on Aug. 19, 2009. [AP/YONHAP]

JOHANNESBURG - Caster Semenya was cleared to return to track by the sport’s governing body Tuesday, ending an 11-month layoff while she underwent gender tests after becoming the 800-meter world champion.

Semenya is allowed to keep running as a woman, although it is unclear if she has had any medical procedure or treatment during her time away.

The International Association of Athletics Federations said medical details of the 19-year-old South African’s case would remain confidential and it will have no further comment on the matter.

The IAAF added in its statement from its Monaco headquarters that it accepts the conclusion of a panel of medical experts that Semenya can compete with “immediate effect.”

She could return to competition at the world junior championships in Moncton, New Brunswick, starting July 19.

“I am thrilled to enter the global athletics arena once again and look forward to competing with all the disputes behind me.” Semenya said in a statement.

Athletics South Africa said Semenya would be considered for the country’s team at the junior championships. The ASA says she must pass a fitness test in Pretoria on Wednesday.

Stander said the African championships in Kenya in late July and the Commonwealth Games in India in October were more realistic targets for Semenya.

Semenya’s lawyers said negotiations with the IAAF lasted 10 months and had been held in Monaco, Istanbul and Parish.

“But due to the nature of the matter the parties resolved to keep the negotiations confidential,” said Greg Nott, managing partner of Dewey and LeBoeuf’s Johannesburg office.

“We are delighted that Caster is finally being permitted to compete with other women, as is her legal and natural right,” lawyer Jeffrey Kessler said. “Hopefully, this resolution will set a precedent so that no female athlete in the future will have to experience the long delays and public scrutiny which Caster has been forced to endure.”

Earlier, Semenya’s father said his daughter had told him before the announcement that she was going to be cleared.

“She told me she doesn’t have any problems and she is happy,” Jacob Semenya said.

The announcement ended a saga in which the teenager burst onto the world scene in Berlin where she captured a gold medal in her first major event. Her dramatic improvement in times and muscular build led the IAAF to order gender verification tests.

Semenya was welcomed as a national hero in South Africa following her stunning victory, but reports of the gender tests and stories in the Australian media saying she had both male and female sex organs caused outrage in her home country and led some public officials to rally behind her.

South African Sports Minister Makhenkesi Stofile called the IAAF ruling “great news for Caster and all of us.”