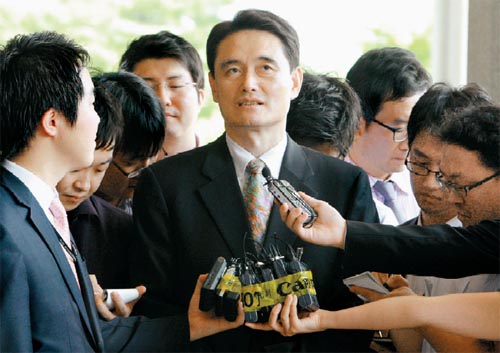 Kim Jong-ik, a businessman who was allegedly illegally investigated by the Prime Minister’s Office, answers questions from reporters before being questioned by prosecutors yesterday. By Kim Kyung-bin

Representative Park Jie-won, floor leader of the Democratic Party, told reporters yesterday the central figure in the scandal is Park Young-joon, a vice minister for government policy at the Prime Minister’s Office, who once worked at the Blue House and was engineering a return, which was resisted by Lee’s existing allies in the presidential office.

“Park had created a plan to reorganize the Blue House secretariat to return to the presidential office, and others are fighting his plan,” the senior DP leader claimed. “We are receiving tips from inside the Blue House and the Grand National Party, asking us to stop Park’s overbearing attempts.”

The tips leaked to the opposition were about “Yeongpo-gate,” an abuse of power scandal centered in the Prime Minister’s Office. The alleged central figure, Park Young-joon, served as senior presidential secretary on planning and coordination from February to June of 2008. After he left the Blue House in the first reshuffle, Park has been serving the Prime Minister’s Office since January last year.

The alleged abuse of power was a surveillance operation run by the ethics team of the Prime Minister’s Office against businessman Kim Jong-ik.

Kim says he was investigated by the team in 2008 because he posted on his blog a 26-minute Internet documentary critical of the Lee government, showing footage of anti-government protestors being beaten and opposition members calling Lee a liar, with a soundtrack that includes the Eric Clapton song “Change the World.” Kim says he lost his job as a result of the probe.

The public ethics team is authorized to investigate public servants, not ordinary citizens.

Both the opposition and the media have been getting tips from Blue House officials about the alleged illegal probe by the Prime Minister’s Office. The DP’s Park refused to elaborate whom he received tips from.

The Democratic Party claims another member, Lee In-kyu, ordered the probe on Kim and reported its results directly to the presidential secretary for labor, Lee Young-ho, another member of the club.

The DP’s Park Jie-won condemned the president for causing a power struggle among his own confidants.

“Because the president is indecisive about reshuffles and wastes time, public servants are engaged in a power struggle to hold on to their posts.”

The DP also complained that the illegal probe was intended to oppress the employees of state-run companies who have close ties with the former Roh Moo-hyun administration. The target of the probe, Kim Jong-ik, had been identified in the investigation as a key member of a group of Roh allies called Nosamo.

Representative Cho Young-teck claimed that there were more victims of illegal surveillance operations, but they were afraid to step forward because they feared retaliation by the Lee government.

Democratic Party lawmakers yesterday paid a visit to the Blue House and met with Park Heong-joon, senior secretary for political affairs, to complain about the scandal. Park told the lawmakers that President Lee had not been aware of the illegal surveillance, dismissing the allegation that the presidential secretary for labor Lee was the mastermind of the illegal probe.

Meanwhile, the prosecution yesterday questioned Kim, the self-proclaimed victim of the illegal surveillance. Before the questioning, Kim told reporters that his life was completely destroyed by the government’s action.

“I have faith that the prosecution will properly investigate my case,” Kim said. “There was evidence that the Prime Minister’s Office knew that I was a civilian from the beginning,” dismissing the government’s explanation that it had mistaken Kim as a public servant at the time of the surveillance operation.