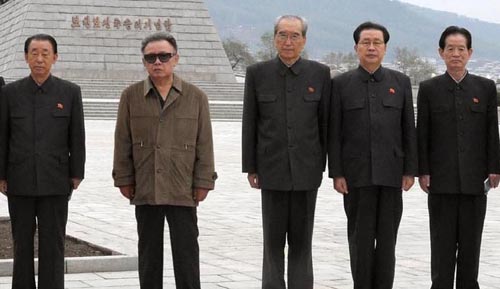 In this photo, released in May by the North’s Korea Central News Agency, Jang Song-thaek, second from right, accompanies Kim Jong-il to a public event. Jang is Kim’s brother-in-law. [YONHAP]


Close scrutiny of North Korean leader Kim Jong-il’s public outings this year reveals he is increasingly relying on relatives, a possible further signal that Kim is planning an unprecedented third-generation power transfer to his youngest son.

South Korea’s Unification Ministry spokesman Chun Hae-sung said Monday that Kim made 77 field trips to military and industrial complexes from January to June this year, and on 56 of them he was accompanied by younger sister Kim Kyong-hui, his most constant recent companion.

Kim Kyong-hui was given a senior post at the Workers’ Party’s industrial supervision agency after Kim Jong-il reportedly had a stroke in 2008 and remained bedridden for months, according to Seoul intelligence officials.

Jang Song-thaek, Kyong-hui’s husband and one of the most powerful men in Pyongyang, accompanied the North Korean leader on 40 field trips, making him the second-most frequent companion. On June 7, Jang was promoted to vice chairman of the National Defense Commission, the most powerful institution in the country, by the Supreme People’s Assembly. The 65-year-old Jang now holds the second most powerful title in the country along with four other vice chiefs who have been in their positions for years.

“Kim has been relying more on Kyong-hui since he collapsed with a stroke in the summer of 2008,” said Kim Yun-soo, professor of national security at the Korea National Defense University. “My view is that Kim, in this delicate process of power transfer to his third son Jong-un, was convinced that his family is the only thing he can truly trust.”

Pyongyang watchers say recent moves by Kim Jong-il seem to show that he wants son Jong-un to succeed him. Jong-un, 27, was elected as a representative at the parliament in March 2009, according to several Western sources.