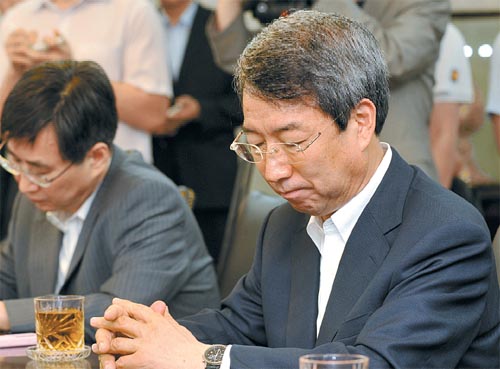 
Prosecutors are swiftly moving to investigate the so-called “Yeongpo-gate,” an illegal surveillance scandal that’s become the government’s latest embarrassment ahead of upcoming by-elections.

Prosecutors said yesterday they will ask Kim Jong-ik, a businessman who was allegedly subjected to an illegal probe by the Prime Minister’s Office, to appear for questioning today.

“We will proceed with our investigation into this case as quickly as possible and examine the allegations thoroughly,” said an official of the Supreme Prosecutors’ Office.

On Monday, the prosecution formed an investigative team comprised of three prosecutors and 15 lower-level inspectors after it received a request from the Prime Minister’s Office.

The Prime Minister’s Office conducted its own investigation last week of public ethics officials suspected of conducting illegal surveillance on Kim and concluded that some of them needed to be investigated by prosecutors for possible abuse of power.

Kim, 56, a former businessman, claimed that he was illegally surveilled and investigated by the ethics officials in 2008 because he uploaded a video clip critical of the Lee Myung-bak administration onto his blog. The public ethics team is authorized to investigate public servants, but not ordinary citizens.

Opposition parties are calling the case “Yeongpo-gate,” because some of the people involved belong to the Yeongpo Club, an organization of public servants from the Yeongil and Pohang areas of North Gyeongsang established in 1980. Yeongpo is an acronym that combines the names of Yeongil and Pohang, the latter of which is President Lee’s hometown. Opposition parties say the illegal investigation was an abuse of public power by the Yeongpo Club on behalf of President Lee.

Lee ordered a swift investigation into the case and punishment for anyone found guilty.

Legislative by-elections, another litmus test for public support for the president, are coming up on July 28.

Opposition parties are expressing skepticism over the objectivity of the investigation and demanding an independent prosecutor be appointed to take it over.