Korea’s zoo elephants to get a little less lonesome

Korea’s zoo elephants to get a little less lonesome 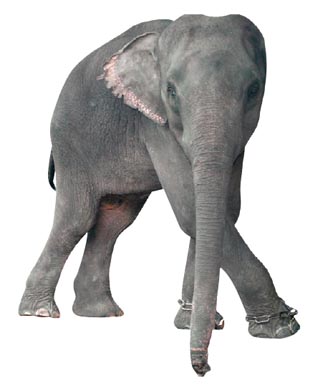 The male elephant donated by Cambodia to Korea. He and a female partner arrive by an Air Force C-130 cargo plane tonight. [YONHAP]

Like its general population, Korea’s elephants are getting older and not reproducing enough to replenish their ranks.

In the Seoul Zoo, Taesan, a 34-year old male, lives the lonely life of a widower after his mate Taesun died of colitis 14 years ago. Of the 11 elephants in six zoos across the country, five are females past childbearing age.

The idea that the nation’s kids might never see a live elephant distressed Wu Si-eon, former head of the Seoul Metropolitan Facilities Management Corporation, which oversees Seoul’s zoos. In May 2009, Wu decided to buy a female to mate with Taesan from an elephant-rich country.

It turns out that’s a very difficult thing to do. The Convention on International Trade in Endangered Species of Wild Fauna and Flora prohibits governments selling or buying elephants.

Wu pleaded for help from Vice Foreign Minister Lee Yong-joon last October and the nation’s diplomats may have solved the problem.

Diplomatic sources told the JoongAng Ilbo yesterday that the government will fly in a male and female elephant donated by the Cambodian government at 7 p.m. tonight. The donation offer came about 10 months after Korean diplomats started their search for an elephant. The sources said the friendship between Cambodian Prime Minister Hun Sen and Korean President Lee Myung-bak smoothed the way.

“Hun Sen approved donating a 20-year-old bull elephant and a 27-year-old cow elephant on June 25,” a diplomatic source said. “An Air Force C-130 jet left for Cambodia yesterday to bring in the elephants, which together weigh 5.5 tons.”

The Foreign Ministry’s initial goal was to get a female between 15 and 30 years old, the most fertile age range.

Then the ministry faced another hurdle: how to get the elephants to Korea. By sea was too slow, and when the ministry inquired into private shipping by air, it gave up after learning it would cost $200,000.

Hearing the predicament the zoo officials faced, a senior Defense Ministry official volunteered the use of an Air Force C-130 cargo plane.

To ensure the elephants have a comfortable ride, Air Force officials prepared two large, shock-proof containers. Three Cambodian elephant experts will accompany the animals to Korea and help them settle in.

“It’s a great diplomatic deal given that elephants are banned from commercial sales and that their value is priceless,” Wu said.

The two elephants will live together with Taesan in the Seoul Zoo to boost the chance of the female getting pregnant, the ministry source said. The elephants will be unveiled to the public this month.