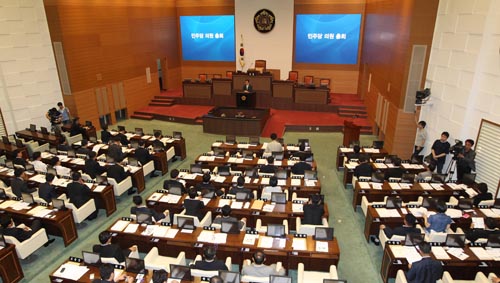 The Democratic Party’s Seoul City Council members held a meeting yesterday. The DP now controls the council and is blocking the programs of Mayor Oh Se-hoon, who belongs to the Grand National Party. [YONHAP]

After being sworn in for his second term on July 1, Oh appointed Choi Hang-do to be secretary general of the Seoul Metropolitan Council’s secretariat, one of the city’s top administrative jobs. Choi was the head of Seoul’s Urban Competitiveness bureau.

The opposition Democratic Party, which now controls 79 of the city council’s 106 seats, decried Oh’s “unilateral” decision. In Seoul, where 20 percent of Korea’s population lives, power is now split between the mayor and his largely antagonistic city council.

“Oh and Heo have cleared up the misunderstanding sparked by the appointment,” Lee said. “Oh will appoint a new secretary general for the council’s secretariat under the recommendation of the council.”

DP council members demanded Oh to withdraw Choi’s appointment because, according to a city councilor, the mayor “ignored laws governing local governments that require a mayor or governor to appoint local council secretariat members recommended by the local council chairman.”

Some Seoul officials said Oh worsened the widening rift by rushing the appointment.

“Oh was too conscious that the opposition party now holds the majority,” a senior official from the city government said. “This unfriendly situation prompted him to speedily appoint a new official to boost his power. It didn’t work and Oh bowed his head at the start of his term.”

Another city official expressed concern that Oh’s signature projects - the Han River Renaissance and Design Seoul - might have to be scaled back.

“The city council will continue trying to take control [of city affairs],” the official said.