In a recent interview with the JoongAng Ilbo, Korea Football Association President Cho Chung-yun discussed Korea’s run to the round of 16 at the 2010 World Cup and the reasons why he is looking forward to the 2014 World Cup in Brazil.

Q. Veteran defender Lee Young-pyo said that he was worried that Korean football would stagnate unless young prospects were trained properly. What is your take on that? 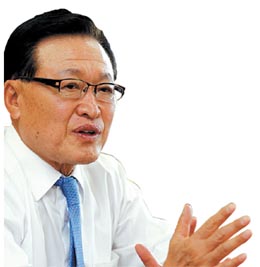 A. We have many talented young players in Korea as well as in overseas youth programs. Baek Seung-ho is currently with the Barcelona FC youth team and Kim Woo-hong is training with the Real Madrid youth club. Olympic manager Hong Myung-bo tested Suk Hyun-jun, 19, of Dutch club Ajax and explained that he was impressed by Suk’s potential. There’s also Son Heung-min, 18, with the German club Hamburg. When it’s time for these players to play at the 2014 World Cup, Korea will have a stronger team than what we saw in South Africa.

Did you expect the national team to reach the round of 16 in South Africa?

There was a strong sense of trust between the manager and his players. Veteran leaders on the team like Park Ji-sung and Lee Young-pyo made their national team debuts with Huh Jung-moo back in 1999. It looked as if Park and Lee were leading the team with a sense of gratitude toward Huh.

Huh, for his part, showed a lot of faith in his men.

Park Ji-sung has hinted at retirement. What do you think?

He probably will not retire anytime soon. At the recent luncheon at the Blue House with President Lee Myung-bak, Park said he wanted to win the 2011 Asian Cup.

There is speculation that current Olympic team manager Hong Myung-bo will take the reins of the national team in time for the 2014 World Cup. Is there any truth to this?

It’s difficult to tell what will happen tomorrow. It’s even harder to predict what will happen four years from now. It’s always good to have a large pool of talented managers. It will be a big plus for us if Hong does well at the 2012 London Olympics.

I intend on giving the new manager at least two years. If he fares well in that time, of course he will continue to manage the national team at the next World Cup.

Your relationship with former national team manager Cha Bum-kun was strained after he was let go during the 1998 France World Cup.

That took place more than a decade ago. I bumped into Cha in the parking lot of the Durban Stadium after our final Group B match against Nigeria [this year]. We had just secured a place in the round of 16. We were ecstatic and hugged each other. When I was the manager at Korea University, I had the opportunity to coach Cha. If Cha is willing, he could contribute to the KFA.