New ‘Housemaid’ is no match for the innovations of the original

New ‘Housemaid’ is no match for the innovations of the original 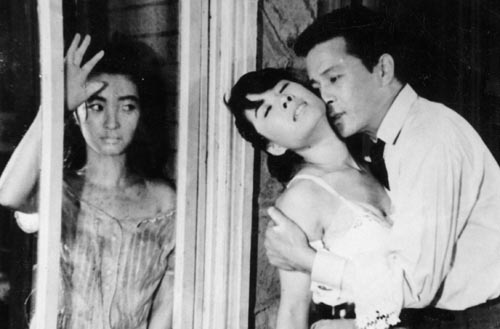 A still from the original “Hanyeo” (“Housemaid”) from 1960 [JoongAng Ilbo]

After watching both versions of “The Housemaid” - the re-release of the original 1960 psycho-thriller film by the late director Kim Ki-young and this year’s Cannes-nominated remake by director Im Sang-soo - it seemed that the appropriate thing to have done would have been to switch their release dates.

In fact, after encountering the banality of Im’s female protagonists in the new film, it was a shock to witness just how bluntly progressive and innovative Kim’s angle on the female psyche and the divide between the social classes was.

The original “Hanyeo” (“Housemaid” in Korean) opens with a shot of the “perfect” 1960s, upper middle-class Korean family. The handsome piano teacher father tells the virtuous mother in a hanbok (traditional Korean costume) the news of the day while their two children play with leftover thread.

The happy family is turned upside down when they hire a power-thirsty housemaid reeking of primal sexuality. She seduces the husband, gets pregnant, threatens the family and in her delusion, starts acting like the wife.

All this is fairly familiar melodrama territory, but then the plot reveals an unexpected twist when instead of reporting the housemaid’s threats to the police, the family decides to carry out her orders, and the housemaid proceeds to become the queen of the household.

The housemaid, a working woman from a lower class who smokes openly and threatens with her naive air of sexuality and hunger for a high social position, brings confusion to traditional class definitions.

As his family becomes increasingly degraded, the male lead is powerless. We learn that it is the wife’s decade-long, part-time sewing job, not the husband’s contribution to the family, that really elevated their social status. Ultimately, the incompetent, fragile husband can only do what the wife or the housemaid asks of him.

Once the thin veil of the traditional Korean family is lifted, the most powerful person in this demented household turns out to be the wife.

“We can’t afford to risk having this kind of scandal revealed,” she urges her husband.

The wife, in turn, is ruled by a force bigger than morals, maternal love or human dignity. She is ruled and ultimately ruined by her economic status, or more accurately, the fear of losing that status.

Kim, who has training as a set designer, is said to have built the movie set, a two-story house, himself. His uses the main stairwell, which connects the housemaid’s attic room and the downstairs family area, as a captivating symbol of the impossible gap between social classes, the divide between seduction and virtue, family and solitude. In the end, it is on this stairwell that the hierarchy of gender and class deteriorates to an eventual tragic end.

After the film ended, I had to check the film leaflet again to make sure it was truly a film shot in Korea 50 years ago.