The two faces of the bourgeoisie

The two faces of the bourgeoisie

Here is a portrait of a woman painted in the mid-19th century by the French artist Jean-Auguste-Dominique Ingres (1780-1867). Her Romantic-era dress, with its tight waist and low bust line, is resplendent with a colorful flower pattern. On her neck and arms are brightly sparkling diamonds, amethysts, garnets and opals. 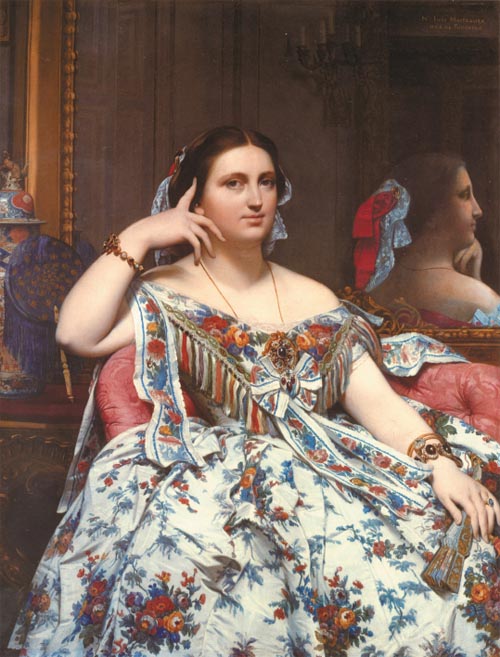 Her face is depicted in the Classical style - with less individuality - and she has ivory skin and big, round dark eyes. In contrast, the texture of her skirt, the decorative tassels on her bodice and her sparkling jewels are depicted precisely in a realistic way.

It is not only what she wears but also the satin couch on which she sits and the Chinese jar behind her that tell us that she is wealthy. Is she a duchess or a baroness?

No, her name is Madame Moitessier and she was not a member of the nobility but of the bourgeoisie. She was the daughter of a civil servant and the wife of the rich banker and lace merchant Sigisbert Moitessier.

After the 1789 French revolution brought about the demise of the Ancien Regime, which was a feudal status system, the bourgeoisie, which had led the revolution, came to dominate both politics and culture.

Although the aristocracy attempted to recover its dominance during the dictatorship of Napoleon Bonaparte and the Bourbon Restoration, power shifted toward the bourgeoisie, which had gained greater economic clout through industrialization.

The rise of the bourgeoisie is reflected in their rising demand for portraits by the successful artists of the day, including Ingres.

Of course, even before the 19th century, rich merchants would order portraits of themselves and their families from famous painters.

At that time, however, they could not be portrayed as lavishly as the aristocracy unless they were either granted a title of nobility or purchased one. 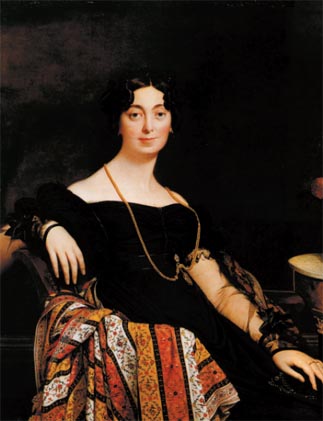 In contrast, the bourgeoisie of the early 19th century - in France after the French Revolution or in Britain during the Industrial Revolution - appear as splendid as dukes and duchesses in their portraits.

Madame Leblanc, whom Ingres painted three decades before he painted Madame Moitessier, was also the wife of a banker.

In the portrait of Madame Leblanc, she wears an empire-waist dress, which was in vogue a generation before the Romantic style became popular.

Her clothing is much simpler than that of Madame Moitessier. Still, we can see that Madame Leblanc is wealthy by the golden watch pendant decorated with turquoise hanging around her neck.

The empire-waist dress of the early 19th century was inspired by the clothing of the ancient Greeks and Romans, reflecting the influence of ancient Greece on the fashion and art of the time. The bourgeoisie, which had brought about the French Revolution, likened themselves to the citizens of ancient Greece, the birthplace of democracy. And the paintings of the time reflect this ideal with their elaborate symmetries and neat edges. In this way, Ingres’ works epitomize the neoclassical paintings of the era.

These trends in fashion and art emerged as a reaction against those of the Rococo era, enjoyed by the pleasure-seeking nobility that was driven out through the French Revolution. The neoclassical style reflected a pursuit of simplicity and a return to purity, whereas the Rococo style was devoted to asymmetry, ornate decoration and curved lines.

This return to simplicity can be seen in the dress worn by Madame Leblanc. The empire silhouette had a narrow skirt and the style is not as opulent as that of the dresses of the Rococo period.

The portrait of Madame Moitessier, which is much more luxurious than that of Madame Leblanc, is emblematic of the social changes of the time, as the bourgeoisie became the new privileged class.

Therefore, the bourgeoisie of the 19th century had two faces. It started as the progressive agents of revolution. By leading political revolutions in France and the Industrial Revolution in Britain, they supplanted the old, status-based system and established the basis for modern democracy. They also advocated for a liberal economy of free competition, going against the privileged landlords and merchants who had ties with the monarchy. Later, as their power and wealth grew, it became clear that the revolution did not extend to all levels of society and their policies sparked a counterrevolution. 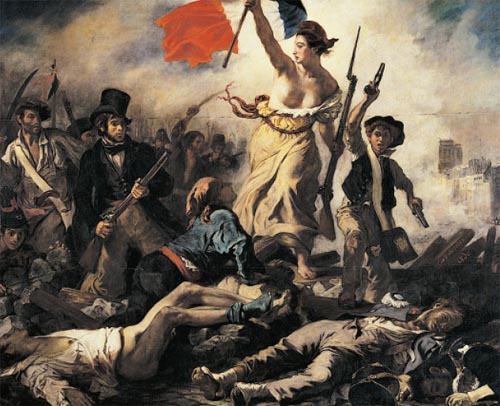 Before that time, however, the bourgeoisie’s role as the instigators of revolution can be seen in the painting “Liberty Leading the People” (1830) by Eugene Delacroix (1798-1863), who was a rival of Ingres.

The July Revolution came about as a reaction to the policies of Charles X, who did not accept the constitutional monarchy demanded by the majority of the French population.

He implemented a series of reactionary policies, including restrictions on the freedom of the press and on voting rights, and dissolved the parliament. After three days of street battles fought amidst hastily-erected barricades Charles X abdicated the throne and was replaced by Louis-Philippe and a constitutional monarchy was finally established.

Delacroix was the leader of the Romantic movement in art that emerged as a reaction to neoclassicism. This painting shows the strong emotions of the Romantic style, in contrast tp the paintings by Ingres in which the emotional element was restrained.

Liberty is personified by a woman wearing a Phrygian cap, which had symbolized freedom during the first revolution. She leads the people forward, holding the tricolor flag - representing liberty, equality and fraternity - in one hand and a musket in the other. There are a number of corpses under her feet, showing that liberty is not automatically obtained but comes through struggle and sacrifice.

Among the people of various classes and ages led by Liberty is a young bourgeois man in a top hat, showing that the bourgeoisie was still the main agent of change in the July Revolution.

As time went on, dissatisfaction with the bourgeoisie grew. They failed to recognize the effects of industrialization and the new liberal economy, including the widening gap between the rich and the poor. And they were lax in extending their newfound political rights to the working class and in some cases even obstructed the rights of the lower classes to gain cheap labor.

The conflicts between the bourgeoisie and the working class deepened in the mid-19th century and the artists who depicted them were the realist painters. I will deal with them in the next article.