In search of a summer splash

In search of a summer splash 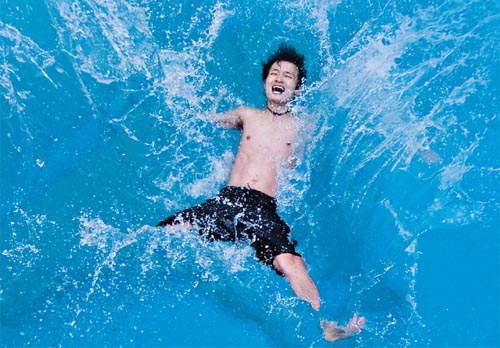 Love it or hate it, summer is here. The mercury is rising, and it’s the season for air-conditioning, cub reporters frying eggs on sidewalks and, of course, water parks.

If Korea’s packed beaches don’t appeal to you and you want more than splashing and sunbathing, water parks offer a wide variety of thrilling and relaxing attractions. From nail-biting water rides and wave pools to spas and massage services, they have it all. Some even have jjimjilbang, or Korean saunas.

Many of the nation’s water parks have renovated their facilities and added new attractions this year in order to survive in a highly competitive market. Caribbean Bay, the country’s first water park, has added more shower booths and hired A-list idol groups 2PM and Girls’ Generation to perform - a first in the park’s 14-year history.

About 30 medium and large theme parks are scattered across the nation as of this month. Since there are so many options, it is important to find the best one for your family.

If you can, visit on a Monday or Tuesday when the park is less crowded, industry officials advise. In addition, be sure to check if you are eligible for any discounts online. Water parks offer up to 30 percent off depending on the type of credit cards you use, and if you are a college student, you can get special discounts from almost every water park. 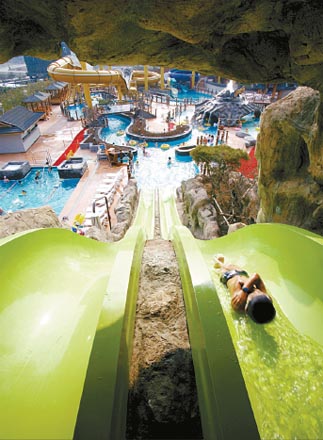 “We are proud that we introduced a new culture where people could spend time and have fun in the water,” said Jeong Soon-ji, an official at Caribbean Bay.

Of course, public and private swimming pools had been around for decades, and some even had slides, but there were always long lines. Caribbean Bay was a revolution, offering dozens of water rides including a pool that made 2.5-meter (8.2-foot) waves.

Located in Yongin, Gyeonggi, an hour from Seoul, Caribbean Bay quickly became a hot spot for young people, and was the world’s fifth-largest water park in terms of visitors last year, according to the Themed Entertainment Association, with 1.45 million wet customers.

The place was so hip at the beginning that rumors circulated that women in one-piece swimsuits weren’t allowed in.

“I know the rumor,” said Jeong with a laugh. “This water park was a popular hangout place for young ladies in bikinis and men with abs. But now it is a more family-friendly place.”

This year marks the park’s 14th year of operation, but it keeps updating its rides and amenities. Last year, two attractions, Tower Raft and Tower Boomerang Go, were added, and this year Caribbean Bay has put its emphasis on improving user convenience by adding 270 shower booths and an extra floor to its locker rooms. More spin dryers have been installed, along with plastic pouches where people can store their wet swimsuits. The water park is also organizing music festivals starting this year through July 24, with a diverse lineup of musicians including M.C. Mong, 2PM and Girls’ Generation. 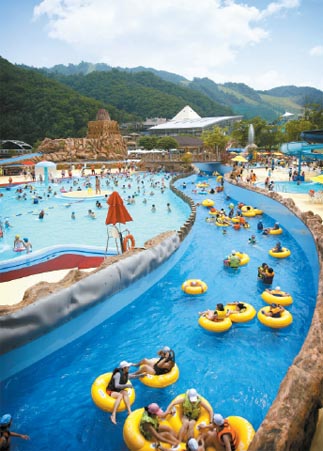 Ocean World is a latecomer, opening in July 2006, but it has shown aggressive growth in recent years. Compared to 1.4 million visitors to Caribbean Bay in 2007, Ocean World had 900,000 visitors, but it saw its numbers leap to 1.31 million last year, nipping at the heels of Caribbean Bay’s 1.45 million.

Now the latecomer is the world’s sixth-largest water park in terms of visitors last year.

“We were pretty late, but we introduced the nation’s longest and biggest attractions, and it helped us grow this big,” said Hwang Young-hoon from Ocean World. One of the slides named Monster Blaster is 300 meters (984 feet) long.

Ocean World, nestled in Hongcheon, Gangwon, is very accessible by public transportation, setting it apart from its competitors. Free shuttles are available from nearby Yongmun Station.

And Ocean World has a plan to catch up to Caribbean Bay. If you book your ticket through the park’s Web site, a locker is automatically reserved for you, unlike other water parks, where you have to wander around to find an empty locker.

Another key factor behind Ocean World’s success is its variety of jjimjilbang, or Korean sauna. The different jjimjilbang available include the bulgama, which literally means fire kiln, and the amethyst room, which features walls covered with the colorful crystals.

Seorak Waterpia: A splash of well-being 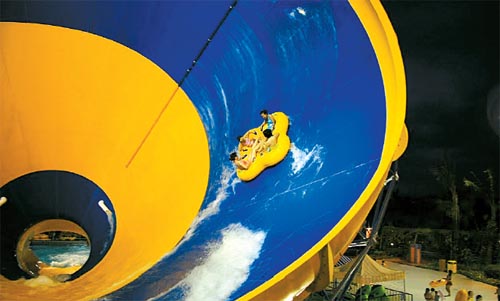 Seorak Waterpia, located in Sokcho, Gangwon, is Korea’s most health-focused water park, actually winning designation as a “quality spa” last year. It uses 100 percent mineral water, which it claims is good for neuralgia, arthritis and skin trouble. The Ministry of Public Administration and Security requires certain standards of temperature and mineral content for “quality spa” designation.

Unlike other entertainment-oriented water parks, Seorak Waterpia offers outdoor and indoor spa facilities appropriate for families. But that doesn’t mean the park lacks for water rides. It features a wave pool and the newly added attraction the Maelstrom, which will open to the public on Aug. 1.

Another attraction of the Seorak Waterpia is its program organizers, or POs. These POs throw welcoming parties every weekend by staging dance and singing performances. They also play water polo with visitors and teach aquarobics.

Compared to Caribbean Bay and Ocean World, Seorak Waterpia is said to be less crowded. 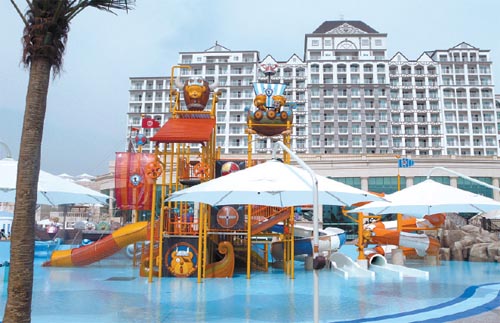 A number of water parks have sprouted in recent years, but many went out of business between 2006 and 2008. One was Fantasion, which opened in Yeongju, North Gyeongsang in 2008. To escape extinction, Tedin Water Park, located in Cheonan, North Chungcheong, relies on cute teddy bear mascot characters. The Tedin family of teddy bears are everywhere, and each attraction is inspired by a different locale: Venice, Rome, Santa Claus Village in Finland and more.

The water park also offers many different spas for family visitors, but it remains to be seen whether this teddy bear-themed water park can appeal to vacationgoers.