Spain’s Carles Puyol, third from left, celebrates after scoring a goal with fellow team members during the World Cup semifinal match between Germany and Spain at the stadium in Durban, South Africa, on July 7. [AP/YONHAP]


JOHANNESBURG - Spain killed off Germany with a single goal in a pulsating World Cup semi on Wednesday to set up a final with the Netherlands where a new winner of football’s biggest prize will be crowned.

A 73rd-minute flying header by defender Carles Puyol from a perfectly placed corner settled one of the best matches of the tournament, in which the ball swung from end to end and Germany mounted waves of desperate attacks in the final minutes.

The Netherlands beat Uruguay 3-2 on Tuesday to reach their first final since 1978.

The result in Durban was a repeat of Spain’s 1-0 victory against Germany in the Euro 2008 final and will mean a European team will now be crowned world champions outside Europe for the first time, at Johannesburg’s cavernous Soccer City stadium. Spain and the Netherlands are two of the best sides never to have won the trophy, but that will all change - for one of the teams - on Sunday. 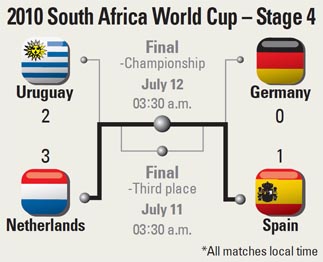 Spain, which looked less impressive earlier in the tournament than the high-scoring Germans but have gradually improved, produced their best performance to beat their young opponents.

“Players from defense to attack were extraordinary and played a great game. We have another game to play... Holland represents the values of Dutch football very well and they’ll be very tough rivals,” said Spain coach Vicente del Bosque.

In Spain’s earlier matches, striker David Villa’s killer instinct in pouncing on any chance had brought victory but today he was frequently stifled by German defenders.

He was ebullient after the match, however: “We’re very happy. The team played their best game yet. We’ve shown that in the big moments we’ve risen to the occasion.”

German goalkeeper Manuel Neuer was gracious in defeat: “They deserved to win and we must now wish them all the best for the final,” he said.

German manager Joachim Loew added: “I believe they’ll [Spain] win this tournament... We played a great tournament but weren’t as sharp tonight as we have been. It’s unfortunate.”

Back in Germany the defeat left heartbroken fans in tears. Men and women wept at a public viewing area in Berlin where 350,000 had gathered to watch on big screens. In another crowd of 50,000 in Munich, many also shed tears.

In contrast, the Dutch nation were swept up in Orange fever on Wednesday after their defeat of Uruguay, which took them to their third World Cup final after defeats in 1974 and 1978. More than 80,000 people - or 10 percent of Amsterdam’s population - watched on open-air screens in the city, which erupted in orange fireworks when the final whistle blew.

The speed and quality of the German side has been one of the surprises of the tournament. Up until the semifinal, the Germans had been the more impressive, with their youngest squad in 76 years scoring four goals on three occasions past Australia, England and Argentina.

But Spain’s domination of possession and passing under pressure on Wednesday finally made the difference.

While German fans were in mourning the victory vindicated yet again a supposedly psychic octopus which has correctly predicted every result in Germany’s World Cup games, including Wednesday’s loss.

Paul the octopus, who lives in an aquarium in western Germany, makes his prophecy by picking food from containers marked with the flags of the two teams. Germany coach Loew kept on his lucky blue sweater for the semifinal but its magic failed to counter the mystic mollusk’s prophecy.

Organizers said on Wednesday that Africa’s first World Cup, which skeptics had for years predicted would be a disaster, would garner the third highest attendance ever after passing the 3 million mark. Only the tournments in the U.S. in 1994 and Germany in 2006 had bigger crowds.