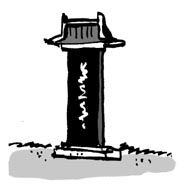 In Yeong-dong, Suncheon, South Jeolla, there is a memorial called the “Eight Horses Monument,” which dates back to the Goryeo era (918-1392).

During the reign of King Chungryeol, it was customary to present magistrates with seven horses when they retired to thank them for their service. But when the magistrate Choi Seok retired, he returned the horses, along with an additional one of his own to the people.

Choi condemned the practice of farewell gifts as an evil that robbed the citizens of their rightful property. And from that moment on, farewell gifts were abolished.

To memorialize Choi’s virtuous act, the citizens raised money and erected the Eight Horses Monument in Suncheon. It was the first monument erected by constituents in commemoration of the just rule and good deeds of a local official.

During the Joseon era (1392-1910), many commemorative monuments were erected all over the country. Whenever there was a reshuffle of local government officials, a monument was erected. But a large number of them were erected by dishonest officials who wanted to be remembered.

The monuments commemorating the false virtue of corrupt officials naturally became the target of people’s disgust. It is said that citizens often vandalized these monuments, smearing them with ashes or even human waste.

The most notorious monument of a corrupt official is that of a magistrate of Gwacheon. When he unveiled the monument on the day of his retirement, he found that the inscription said, “Today, we send off the thief.” The magistrate retorted, “Tomorrow, another thief will arrive and thieves will continue to arrive.”

Of course, there were monuments erected for genuinely great leaders as well.

Yi Ji-ham, the author of “Tojeongbigyeol,” was one of these exemplary officials. When he became the magistrate of Asan during the reign of King Seonjo, his first act was to establish a shelter for beggars. He believed that it was the duty of the local government to take care of poor subjects. The monument to his good deeds stands in the front yard of the Yeongin-myeon office in Asan.

A recent controversy has erupted over a commemorative monument that was erected for the outgoing head of Dongjak District in Seoul by the Dongjak Culture Center. If the statue was erected by the local residents because of their genuine admiration of the official, there would be no controversy. But this monument, like so many others in local government history, has become the target of collective disgust.

As the newly elected officials begin their terms this month, I hope that there will be many mayors and county heads who earn the respect of their constituents, so that monuments in commemoration of their good deeds are erected all over the country.