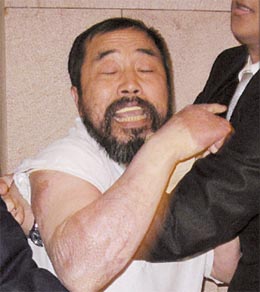 Kim Ki-joong, above photo, throws a lump of concrete at Japanese Ambassador Toshinori Shigeie, at the podium, yesterday evening at the Korea-Japan Future Forum.

Foreign Minister Yu Myung-hwan phoned Japanese Ambassador Toshinori Shigeie Wednesday night to apologize after a Korean man hurled a lump of concrete at him at the Korea-Japan Future Forum.

Kim Ki-joong, who identified himself as a civic activist promoting Korea’s territorial sovereignty on Dokdo, which is called Takeshima in Japan, threw a cell phone-sized piece of concrete at Shigeie after he gave a speech at the forum Wednesday in the Press Center in downtown Seoul.

“Minister Yu made a phone call to Ambassador Shigeie to express his regrets,” Foreign Ministry spokesman Kim Young-sun said in a briefing yesterday. “What happened last night was completely unacceptable and we are feeling very regretful about it.”

The spokesman said the Korean government asked police to beef up security around the Japanese embassy and the ambassador. There has been no official complaint from the Japanese government, he said. 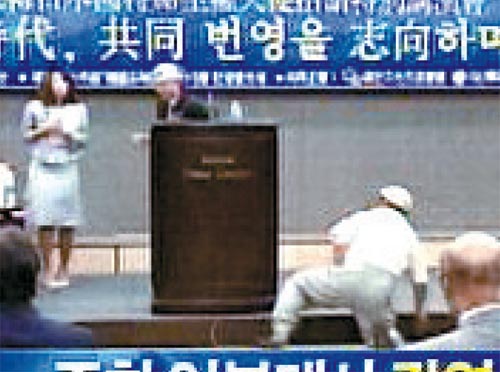 The photo is a grab from an MBC news report.

During a question session after Shigeie’s speech, Kim started yelling that Korea was divided because of Japan and suddenly threw a chunk of concrete at the ambassador. Shigeie avoided the attack by stepping off the podium. But Mayumi Horie, his translator, was hit in the hand and taken to a nearby hospital. She was sent home later that night.

The Namdaemun police precinct arrested Kim, saying the 50-year-old premeditated the attack by bringing the piece of concrete in a paper bag.

Shigeie is scheduled to leave Korea on July 20 after completing a three-year posting. His time in Korea has been marked by constant diplomatic feuds over the small islets in Korea’s East Sea. The Foreign Ministry summoned Shigeie four times to file complaints about the dispute, mostly when Japan’s government approved textbooks describing Dokdo as Japanese territory. He was summoned in May 2008, July 2008, December 2009 and March 2010.

Masatoshi Muto, Shigeie’s successor and current ambassador to Kuwait, is expected to arrive in August.