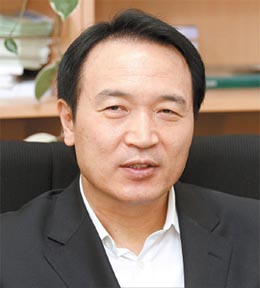 The announcement followed Lee’s reorganization of the presidential office on Wednesday, an attempt to improve the administration’s popularity in the aftermath of the ruling party’s defeats in last month’s local elections.

According to the Blue House, Yim is a veteran policy maker with financial expertise. He was Lee’s chief of staff during the 2007 presidential campaign. From May 2008 to May 2009, Yim served as the GNP’s chief policy maker. Lee named Yim as his labor minister in September 2009.

“Yim understands the president’s philosophy better than anyone,” said Lee Dong-kwan, the president’s senior public affairs secretary. “The president highly values Yim’s sociability and open-minded attitude to listen to a wide spectrum of opinions. The appointment is the most appropriate to achieve the goal of better communication with the public and implementation of people-friendly policies.”

The president also expects Yim, 53, to invigorate the Blue House operations, the spokesman said. After young voters gravitated to the liberal opposition candidates in the June elections, Lee vowed to appoint younger staffers to freshen his administration’s image.

A native of Seongnam, Gyeonggi, Yim studied business administration at Seoul National University and passed the civil servant’s exam in 1980. His political career began in 2000 when he was elected as a lawmaker from his hometown. He also served as the head of the GNP’s think tank, the Youido Institute, from 2006 to 2007.

According to the Blue House, Yim has also strived to resolve the perennial regional split in the Korean politics by trying to harmonize the Gyeongsang and Jeolla areas. Calling him a centrist pragmatist, the Blue House said Yim is also known to maintain an amicable relationship with other political parties, and expectations are high for him to assist the president with communication and negotiations with the opposition.

“An administration that does not understand where the people’s interest lies will never succeed,” said Yim yesterday at the labor ministry. “We should redirect our vision, which has been focused internally, to the outside and on the people’s sentiment.” Yim also indicated that he will give up his legislative seat once his appointment is confirmed. “Since I am assuming a post that requires incredible responsibility, a by-election will have to take place,” he said.

President Lee’s decision to appoint one of his most trusted confidants as chief of staff received mixed reactions. Last year, local media reported that Yim secretly visited Singapore as the president’s negotiator to meet with North Korean officials to discuss a possible inter-Korean summit. Yim and the Blue House have refused to comment on the reports. While the Grand National Party welcomed Yim’s appointment, opposition parties criticized Lee for making a “revolving door” appointment. “President Lee’s chronic illness has resurfaced. There’s no reform when a person simply changes his post from here to there,” DP spokesperson Woo Sang-ho said.

“The president apparently thinks the June 2 local election defeat demands a minor edit of the Blue House organization chart, and that’s a pathetic perception of the reality,” Woo added.

DP floor leader Park Jie-won was less critical. “Yim worked for a long time as a public servant, and his reputation inside the legislature is good, so I think he is faultless for the post,” Park told MBC radio.

The ruling party came to Yim’s defense. “Yim is a veteran policy maker with particular expertise in economic issues,” said GNP spokesman Cho Hae-jin. “He is also a three-term lawmaker who knows how to read public sentiment. He is a person who can communicate amicably with both ruling and opposition parties.”

A senior Blue House official said the appointments of new senior secretaries will come in a few days.

“Because we have to appoint several officials at the same time, it will require some time,” the official said. The announcement will be made over the weekend at the earliest.

A cabinet reshuffle is expected to come shortly before the July 28 legislative by-elections.