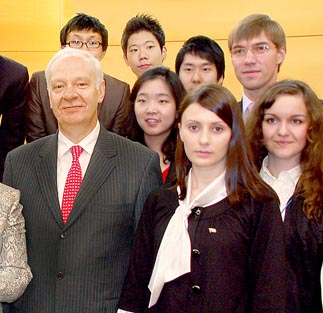 Putina, 24, arrived in the country last Friday to participate in the first annual Korea-Russia Dialogue for university students held by Korea University in Seoul. She departed yesterday.

“She was invited by the school because Putina has shown great interest in youth problems,” said a school official.

The niece of the former Russian president is said to have declined requests for interviews because she wanted her first visit to Korea to be a “quiet one,” the official said. Putina stayed in a separate hotel from other Russian visitors and had a bodyguard to keep her visit under wraps.

“[Putina] bought a hanbok in Insa-dong, and said she would wear it during her next Korean event. She found it very pretty,” said the official. Korea University officials who were at the event described the young woman as “quiet but smart and charismatic.”

Putina gave addresses at both the opening and closing ceremonies of the Korea-Russia Dialogue and requested students to “take interest in social problems and take action as young people.”

Hyundai and Lotte Groups hosted a dinner event for the prime minister’s niece, who also serves as chief editor of Rossiya Yedinaya, a magazine published by her uncle’s party, United Russia.

The event was hosted by Korea University to mark 20 years of cooperation between Korea and Russia with 20 participants selected from universities in each country.