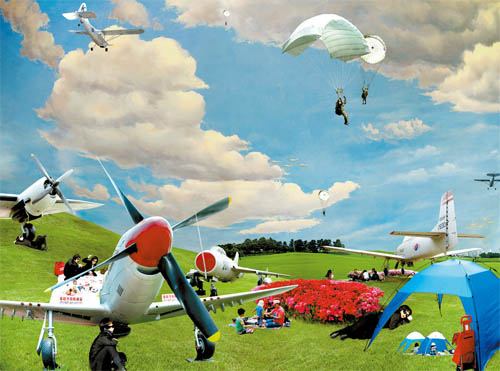 This photograph, by artist Koo Bon-chang, of a warhead dating from the Korean War is part of an exhibit at the Daelim Contemporary Art Museum. Provided by the museum

“On the Line,” organized jointly by the Daelim Contemporary Art Museum and the Defense Ministry, features 150 works by 10 major Korean artists, and occupies two floors, divided depending on the artists’ ages. All the works are new.

“We saw a vast difference in the 10 artists’ approach to the Korean War according to their age groups, in particular, between those who actually lived through the war and the younger artists who didn’t,” said Shin.

The first floor is home to photography by older heavyweights, including Koo Bon-chang, Kang Woon-gu and Joo Myung-duck. Koo photographs various items used during the Korean War, including knives, bombs and military boots. The artist said that through these images, he wanted to express “the lingering silence of the aftermath of war.”

Joo Myung-duk’s black-and-white photographs are close-ups of the faces of Korean War veterans, all of them with different wrinkles and expressions.

“The Korean War began when I was in the fourth grade at Hyehwa Elementary School. I recall my father holding a Korean flag on the eve of Sept. 28, the day that Seoul had been recaptured,” the artist wrote in the exhibition introduction. “The young boy has now turned into an old man over 70.”

Younger artists featured on the second floor, including Won Seoung-won, Nanda and Choi Kwang-ho, deviate from a more literal approach to the war and instead use humor, irony and digital photography techniques to get their messages across. In one photograph of the wide, grassy area in front of the War Memorial of Korea, Nanda reassembles the scenery to include images of himself in various roles, like a picnicking family or a person taking a lazy, afternoon nap.

“I turned my attention to the Korean War and the division of the country, which has now turned into a type of spectacle for sightseeing,” the artist wrote in the exhibition intro. “Sixty years have passed since the Korean War, and the current situation feels as distant as the amount of time that has passed.”

Every Wednesday and Sunday (at 10:30 a.m. and noon) until the exhibition ends on Aug. 20, the actors Lee Jun-ki and Lee Dong-wook, who are both now serving their mandatory military service, will serve as guest docents for the exhibition.