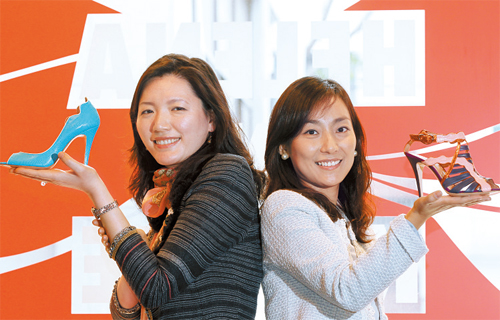 Hong Hye-won, left, and Ko In-hee hold up two of their brand’s shoes at a store on Garosugil in southern Seoul. By Kim Sang-seon

Two heads are better than one. The old saying holds up in the fashion world, characterized by dynamic duos like Dolce & Gabbana and DSquared2, which is run by a pair of twin brothers. Now there’s a new Korean pair on the scene, running Helena and Kristie, an up-and-coming local shoe label.

The two entrepreneurs behind Helena and Kristie are Hong Hye-won and Ko In-hee.

Hong and Ko met four years ago. Shortly after that, they left their jobs, and took the opportunity to start a new venture together. The goal: to start their own global fashion brand.

Hong had worked at Dolce & Gabbana for four years as a shoe designer. Although she majored in ceramic art in college, she shifted her focus to bags and shoes, going to the Marangoni Institute in Milan for further study. Ko majored in fine art in college and had worked at various shoe-oriented fashion brands such as Esquire, Soda, Time and more for 14 years. But these two ambitious women weren’t satisfied with bringing someone else’s ideas to life. Hong came up with the sketches for the pair’s first designs, then Ko, with her deep knowledge of the nitty-gritty of fashion and keen eye for detail, would turn Hong’s work of art into something a woman could actually wear. 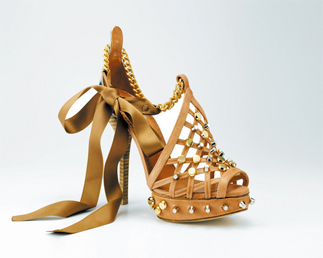 “We separate our duties into two parts. Being a duo is actually a huge asset. We recognize the different talents we both have and fill the gaps which one may miss,” the duo said.

In line with their global ambitions, Hong and Ko made their debut at the September 2009 Pret A Porter Paris trade show. At first, they used their initials as the brand name, but later they added English names that start with the same letters, and so Helena and Kristie was born. Their debut was met with immediate success. Galeries Lafayette, a French department store, ordered 200 pairs of their shoes, and they even signed a deal with an Italian distributor, Studio G. Their work spread throughout Europe, and this spring marked the opening of their very own shop in Sinsa-dong, Seoul.

Even with so many things going on, Hong and Ko have maintained a clear vision.

“We want to become a brand like Jimmy Choo or Manolo Blahnik, making shoes into not just covers for feet, but works of art that make women want to own a collection for themselves,” the couple said.