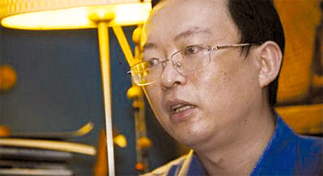 Chinese dissident writer Yu Jie spends his days between two worlds: the spiritual, with the Bible to offer him guidance, and the virtual, with Twitter as the best way for him to get his message out. Yu, 36, was detained and questioned for four-and-a-half hours on Monday by secret police after he used the popular microblogging site to reveal his plans to publish “Wen Jiabao: China’s Best Actor,” a critical look at the premier.

The rebel author - an often harsh critic of the ruling Communist Party - says his interrogators threatened him with jail time if he goes ahead with the project, set to be released in Hong Kong, but he remains undaunted.

“Foreign media outlets and experts, along with the Chinese media, have a favorable view of Wen, describing him as a progressive and a political reformer, but for me, that view is a skewed one,” Yu told AFP in an interview.

The 67-year-old premier, often called “Grandpa Wen” for his ability to connect with the people, has instead worked with President Hu Jintao to further restrict civil liberties and increase the powers of China’s feared secret police, he said. The writer admitted he was dumbfounded when one of those state security agents, who identified himself only as Mr. Zhu, said he had been watching him for a decade.

“It was the first time I was meeting him, but he said he’d known me for 10 years and had been tasked with shadowing me,” Yu said at his home in a residential area of Beijing, not far from the city center.

Immediately upon his detention, Yu, who has a literature degree from the prestigious Peking University, but no steady job at the moment, turned to the power of Twitter. He sent a text message to his wife, who then announced to the blogosphere that Yu had been carted off. “Friends found out about it that way, as did the foreign journalists who then contacted her,” said the dissident, whose books have been banned in mainland China since 2004 but are available in Hong Kong.

His Twitter account name is provocative - “Yujie89” refers to the army’s brutal crackdown on pro-democracy protests in Beijing’s Tiananmen Square in June 1989.

Yu is one of the most active Chinese dissidents using Twitter. Since December, when he joined the social networking site, he has amassed more than 10,000 followers. The Chinese government blocks Twitter, but many people access it on the mainland via virtual proxy networks. Yu says that is evidence of the slightly different role the site plays in China, as compared to the West.

“In China, you have to get around the Great Firewall, so those who use Twitter are usually interested in politics,” explained the bespectacled writer, speaking slowly and deliberately. “For me, it’s a very important way for me to express my political opinions.” Since Monday, he has described in detail his experience with the police on Twitter - in 140-character snippets.

While he defended his right to freedom of expression as enshrined in the Chinese constitution, he says the police warned him about endangering national security with his book on Wen, which he plans to publish within three months.