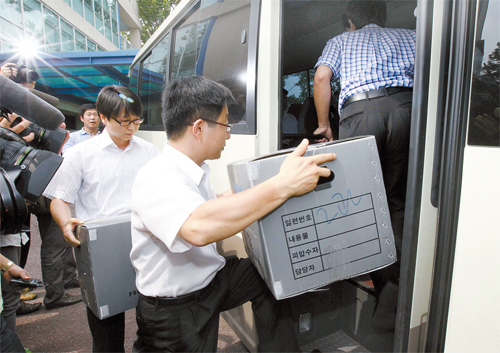 The prosecution raided the Prime Minister’s Office yesterday to investigate an alleged abuse of power by President Lee Myung-bak’s acquaintances.

At the same time, the so-called Yeongpo-gate scandal - referring to an old boys club of friends of the president -- spread to a new realm as the opposition Democratic Party linked the presidents’ friends with a well-known illegal lobbying scam that drove former President Roh Moo-hyun to commit suicide.

Around 10 prosecutors and inspectors from the Seoul Central District Prosecutors’ Office raided the public ethics division office of the Prime Minister’s Office in Changseong-dong, Jongno, at around 10:20 a.m.

The prosecutors’ office said the team confiscated documents and computer files from offices, including that of Lee In-kyu, a public ethics official who allegedly ordered the illegal surveillance and investigation of a businessman associated with the opposition. The businessman said the investigation lost him his job and ruined his life.

“It’s possibly unprecedented for the Prime Minister’s Office to be raided by the prosecution,” said an official at the office.

The prosecution raid followed its questioning of businessman Kim Jong-ik, the victim of the alleged illegal surveillance, on Wednesday. Kim, former head of NS Hanmaum, an outsourcing company for Kookmin Bank, was an active member of Nosamo, a group of progressive-minded people that supported President Roh. He claims he was investigated after uploading a video clip critical of President Lee to his blog in 2008.

The public ethics division is allowed to investigate civil servants, but not ordinary citizens. According to acquaintances of Lee In-kyu, he is claiming that he thought KB and its subcontractors were government organizations. KB, one of the country’s largest banks, was established by the government in 1963 but privatized in 1995. The prosecution plans to summon Lee In-kyu over the weekend.

The scandal gets its name from the Yeongpo Club, an organization of public servants from the Yeongil and Pohang areas of North Gyeongsang established in 1980. (Yeongpo is an acronym that combines the names Yeongil and Pohang.) The president is from Pohang. The opposition says the group has abused the power of the state to go after the president’s critics. The Democratic Party claimed that the ethic’s bureau’s Lee In-kyu is a club member and that he reported his investigation results directly to the presidential secretary for labor, Lee Young-ho, another member of the club.

The DP charged that Ra broke the real-name financial transaction act when transferring 5 billion won ($4.2 million) to the personal bank account of Park in 2007.

Prosecutors investigated Park over an illegal money-for-influence scandal in 2009. Roh killed himself after prosecutors investigated allegations that he and his family received at least $5 million from Park. Shinhan Financial Group grew sharply during the Roh administration by taking over LG Card, then the nation’s largest credit card issuer.

“The transfer violated the real-name financial transaction system, but the Financial Supervisory Service has taken no action against it,” said Park Jie-won, “because he is under the protection of a high-level figure in the Yeongpo Club.” Park threatened to disclose the name of the high-level figure unless that person confessed the truth.

The ruling Grand National Party launched a counterattack. Cho Jeon-hyeok, a GNP lawmaker, held a press conference Thursday and said he received a tip that Kim Jong-ik is suspected of having raised a slush fund for the Roh Moo-hyun administration when he served as the head of NS Hanmaum.