Duo makes songs for a breezy ‘Day Off’

Duo makes songs for a breezy ‘Day Off’ 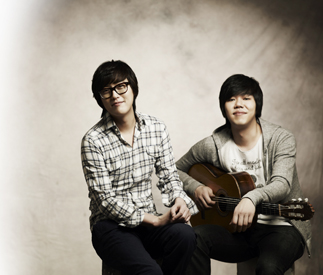 When Kim Dong-ryul, a well-known ballad singer-songwriter, and Lee Sang-soon, the guitarist for the rock band Roller Coaster, first met, they shared an interest not in music but in photography and travel. It wasn’t until later that they began the musical collaboration that led them to form the group Veranda Project.

Now, the duo has a new album revolving around travel, which seems an appropriate venture for a pair of musicians whose professional relationship blossomed while they were working together overseas.

The album, a breezy acoustic collection titled “Day Off,” contains songs such as “Bike Riding,” “Train” and “Mountain Climbing.” The songs plainly depict a journey away from home on a carefree day off from work.

“Anyone who enjoys taking trips will enjoy our music,” Kim said.

The two met five years ago through an online photography club, but they didn’t work together professionally until Kim visited Lee in the Netherlands in 2008.

Lee had gone there two years earlier to study in the jazz department at the Conservatory of Amsterdam following the release of Roller Coaster’s fifth album in February 2006.

“It all started when Kim came over to Amsterdam while I was studying there,” Lee said. “I suggested that we play some music together since we’re both musicians.”

Together, the two produced the song, “Girl Selling Flowers,” a nostalgic acoustic song that made good use of their guitar and vocal talents.

The duo continued to meet and work together in Amsterdam over the next year, when they formed Veranda Project.

“If you want to make a project album, everything needs to just click,” says Kim. “Not only did we have the perfect timing, we also had the right synergy between us to do this sort of thing.”

The artists said that they each had something to offer that the other didn’t, and with teamwork they were able to fill in the gaps in their talents.

Kim, who was used to creating music with the soft notes of the piano, welcomed the sounds of Lee’s acoustic guitar.

Lee, who had never sung professionally in his life, was able to contribute his voice to the music, in addition to his guitar playing skills.

“I was finally able to see what a guitar was really all about,” says Kim. “The innate harmony that the guitar has when the strings are strummed became the foundation for the album.”

The duo held their first concert on June 19 at a small cafe in Hapjeong-dong, near the clubs of Hongik University, and their second concert at another cafe in the same neighborhood on July 6.

To promote the concert, the duo took an unusual approach to advertising.

For the first concert, they taped an A4 sized sign to the front of the cafe on the day of the concert.

For the second concert, they posted a notice on Twitter.com and on their management company’s Web site - just two hours before the concert was scheduled to begin.

“We wanted to see how the audience would react to us if they were just dropping by to hear our music without knowing much about us,” said Kim.

The first concert was a success, with 79 people stopping by to listen to the combo. The second concert was an even bigger success, and the duo attracted about 200 fans. That was twice the cafe’s capacity.

The Veranda Project is currently preparing for a larger concert next month.