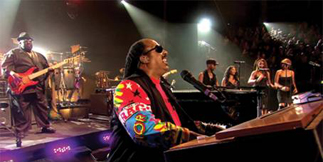 Stevie Wonder returns to Seoul for the first time in 15 years on Aug. 10. Provided by Hyundai Card

“Stevie Wonder is one of the best living musicians representing the U.S. pop scene,” said the card issuer, the nation’s second-largest credit card issuer by market share. “The concert will be a venue [for the audience] to listen to and feel the music of Wonder, who has sung about peace and love for almost half a century since his debut.”

The artist, known for his musical talents and his lasting influence on generations of artists, will be singing signature works such as “You are the Sunshine of My Life,” “I Just Called to Say I Love You” and “Isn’t She Lovely,” as well as newer material.

Wonder, who went blind shortly after his birth in Michigan in 1950, signed with Motown Records’ Tamla label when he was 11 years old and has performed and recorded for Motown ever since. He has recorded more than 30 hits on the Top 10 list in the United States and received 22 Grammy Awards.

The singer has also led political movements, including his 1980 campaign to make Martin Luther King, Jr.’s birthday a U.S. holiday.

He was named a United Nations Messenger of Peace last year. In the same year he became the second recipient of the Library of Congress’s Gershwin Prize for pop music, which was presented to him by President Barack Obama in a ceremony at the White House. The award is given to a composer or performer in recognition of their contributions to popular music.

This concert is part of the Hyundai Card Super Concert series, which has featured world-renowned superstars such as R&B artists Usher and Beyonce, singer-songwriter Billy Joel and Spanish tenor Placido Domingo.

The concert starts at 8 p.m. on Aug. 10 at the Gymnastics Hall at Olympic Park in southeastern Seoul. Tickets range from 77,000 won ($64) to 196,000 won and Hyundai Card subscribers can receive a 20 percent discount for up to four tickets. For details, visit http://privia.hyundaicard.com.