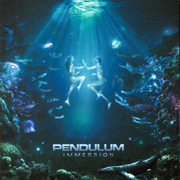 Once you start listening to this album, it’s impossible to stop.

Pendulum’s electronic rock music is in the “drum and bass” style. Characterized by fast beats and heavy bass, D&B has been called one of the toughest types of electronic music to digest. But Pendulum has found a way to make this music accessible in “Immersion” to even the first time electronic music listener.

While originally from Australia, the band now resides in the U.K. where D&B has a strong following. “Immersion” hit the No. 1 spot on the U.K. Top 40 charts the week it was released.

In keeping with its name, “Immersion” transports you to a hypnotizing world of rave that no words can describe. Just press the play button to find out.