A network of memorials for Korea’s allies

A network of memorials for Korea’s allies 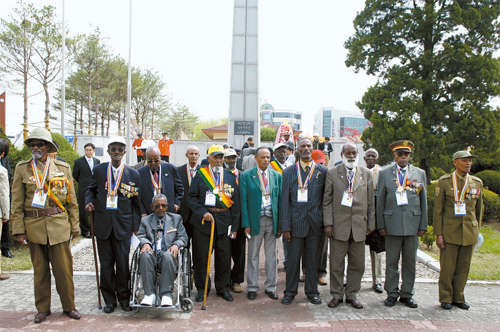 Ethiopian veterans stand in front of the Ethiopian UN Participation Monument in Chuncheon, Gangwon. Provided by the Ministry of Patriots and Veterans Affairs

Rising up from a grassy hill alongside Highway 1 near the Pyeongtaek Interchange, a slender monument may have piqued the curiosity of passing motorists who may have wondered what it meant.

The monument, which memorializes the contributions of South Africa during the Korean War, is just one of Korea’s many UN Participation Monuments, a lifelong project carried out by one man, Chi Kap-chong.

“In the years following the war, many Koreans didn’t know much about the history of the war,” the 83-year-old Chi said. “Many people know about the American involvement, but did not know about other nations like Australia, Thailand or even Ethiopia.”

According to Chi, who is the chairman of the United Nations Korean War Allies Association, the purpose of the participation monuments is twofold - first to educate the public and second to commemorate the contributions of UN soldiers and encourage them to visit, in some instances, the same battlefields where they fought during the conflict.

“When veterans first returned to Korea to visit the battlefields there was nothing there to mark them,” Chi said. “My plan was to have a simple monument to commemorate the involvement of each participating nation.”

In the beginning, Chi paid for the monuments out of his own pocket. He even bought the land where they would be built and later donated the land to local governments with the stipulation that the land never be sold. Steel and cement companies provided the raw materials for some of the earlier monuments while Chi paid for labor costs.

However, following a meeting with President Park Chung Hee in 1969, the Ministry of Defense offered to pay for each of the remaining monuments.

Designed by South Korean university professors, a total of 13 monuments were erected for each of the participating nations (including a combined Commonwealth monument for Australia, Canada, New Zealand and the United Kingdom at Gapyeong, Gyeonggi, and a combined monument for Belgium and Luxembourg at Dongducheon, Gyeonggi). The last one, a tribute to the allied medical units, was erected in Busan in 1976. An individual monument for Task Force Smith is located outside of Osan, with a British Gloucester Memorial at Solma-ri and a War Correspondents Memorial at Munsan.

In selecting sites, Chi tried to put them as close as he could to the old battlefields. In some instances, the sites were selected before highways and expressways were built.

There were notable exceptions, though, like Turkey’s participation monument.

“One of the biggest battles soldiers from Turkey fought in during the war was at Kunu-ri in North Korea,” Chi said. “Therefore, I had to choose a secondary location at Yongin.”

Chi, who served with the U.S. Military government before the war and was a student volunteer with the 11th ROK Division, covered the war as a war correspondent for Reuters and the Kukje Daily.

However, as chairman of the UN Korean War Allies Association, Chi has devoted his life to remembering and honoring those UN member nations that fought in the Korean War.

The organization was intended to improve international relations between Korea and the allied nations that fought in the Korean War. These relationships, according to Chi, are “people to people” projects for not only war veterans, but also for families and citizens from their respective countries.

Chi is modest about his involvement with the UN Korean War Allies Association and the work he has performed to have all these monuments built. Still, Chi takes great satisfaction in what these monuments have meant to veterans.

“Many veterans have told me that they are proud of these monuments,” Chi said. “These monuments mean that Korea has not forgotten them.”