My short term as mayor of Seoul

My short term as mayor of Seoul 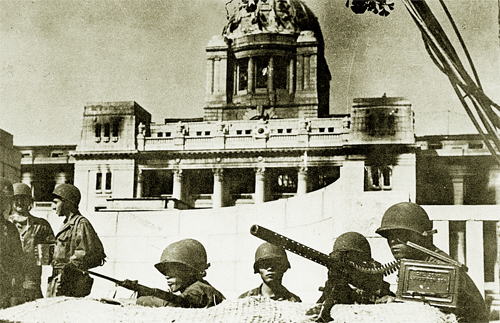 South Korean and American gunners guard the Japanese General Government Building in Seoul. The building itself, charred from artillery shells and fire, can be seen in the background. [JoongAng Ilbo]

Today, as a reporter for the JoongAng Ilbo (the Korean edition of the JoongAng Daily), Choi Moon-hwan talks with Gen. Paik Sun-yup for the regular Korean War Remembered series. But in 1950, he was a recruit in the South Korean Army.

I wouldn’t consider myself the type of person with particularly good fortune when it comes to employment. But I can say I have served as the “mayor of Seoul” and “governor of Cheorwon” so I guess I shouldn’t sell myself short. It all happened during the war.

I was raised in an affluent household in Maseon-eup, Shingaye County in Hwanghae. Due to our social standing, it was not possible for our family to live in comfort under the rule of the communist regime. I decided to relocate to Seoul in 1947, leaving behind my parents and siblings.

I clearly remember one of the last words my father told me on the day I left my hometown: “You must seek revenge against the communists.” 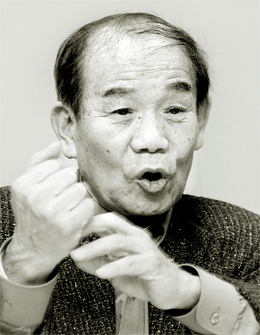 I carried those words with me after leaving behind my family in the North. Then the Korean War broke out on June 25, 1950. It didn’t take long for me to live up to my father’s words as I enlisted in the ROK Army in September 1950 as a student soldier.

I followed the ROK 1st Division’s 11th Regiment until I was placed with the 15th Regiment. I participated in my first battle the following month in Unsan, North Pyongan Province in October 1950 against the Chinese People’s Volunteer Army. I recall vividly how we were no match for the Chinese, and they pushed us down as far as Ansan, Gyeonggi. It would take until February 1951 to inch our way back up north by winning some crucial battles along the way.

Upon reaching the areas around Seoul, I recall how we headed up the hill near what is now the Chung-Ang University campus just south of the Han River. I couldn’t help but gaze at a nearby corpse. The dead soldier was dressed in summer military fatigues with matching boots. Near the half-decayed corpse was the deceased soldier’s helmet lining with a piece of his hair stuck to it. His dog tags were nowhere to be seen. He looked to be one of the many soldiers killed in action during the retreat south in the summer of 1950.

The excitement of returning to Seoul, coming across the corpse and the sight of the capital city in the distance set off mixed emotions as we set to re-enter Seoul.

I crossed the Han River as a member of the ROK 1st Division’s Intelligence Section. It was a select group of men given the task of being the first to enter Seoul after the Allied Forces had reclaimed it. We got on an amphibious vehicle and landed on the sandy shores of the Han River in Mapo, western Seoul and transferred onto a jeep. We travelled past the hills of Ahyeon-dong and finally arrived at Seosomun in the Jongno area.

We expected a sizeable crowd to greet us in Seoul, but there wasn’t a soul in sight during our drive up to Jongno. Only when we arrived at Jongno 3-ga Station did we come across a young women holding a baby with a blank stare. It was hardly the type of reception we had in mind, and it took us two to three days after entering the capital city to start to notice people. Most appeared emaciated. It was clear the people were struggling to find food.

The city itself was pitch-dark after sunset. The Dongdaemun Market was serene and somber in the dark. The charred Hwashin Department Store in Jongno and the YMCA buildings were mere shades of their former selves. Having been seized by enemy troops on two different occasions, Seoul had the appearance of a beaten and disheartened place on its last legs.

It was at this point that I became the “mayor” of Seoul. Our duties were to go on search missions from building to building to check for any remaining enemy soldiers. I recall gathering at a building next to the Korea Meteorological Administration building with two other soldiers. We received rice rolled into balls so that it could be easily carried. We took up M1 Carbine semiautomatic rifles and patrolled the Gwanghwamun area, the old Russian Legation and the road along the stone walls of Deoksu Palace.

We checked the YMCA, Bando Hotel (now the site of the Lotte Hotel), old City Hall and Bank of Korea buildings on a daily basis. From time to time, we also made a stop at the presidential palace on the present-day site of the Presidential Blue House.

We were responsible for protecting the city, and for this reason, my colleagues and I took to jokingly calling ourselves the mayors of Seoul. It also came from our sense of pride in protecting the capital city.

I think it was approximately three days after we re-entered Seoul that we raised the Korean flag at the Japanese General Government Building in central Seoul under the watch of the those affiliated with Army Headquarters.

As we quietly raised the Korean flag, I thought about the day we entered Pyongyang in October 1950. At the time, a large crowd gathered to celebrate our presence. In contrast, this flag raising in Seoul seemed like a solemn affair. Our stay in Seoul lasted just 10 days as we had to march to Bongilcheon, an area just south of the Imjin River, to prepare for the march north.

It was at that time we encountered Brig. Gen. Paik Sun-yup. A jeep had barely made its way out of a ditch and I got a glimpse of a star on the shoulders of one of the passengers in the jeep. We immediately saluted the general. Brigadier General Paik had a bright smile on his face as he returned the salute. As a low-ranking soldier, it was a huge morale boost to see the general among us on the front lines.

I would later go on to join the U.S. Army’s 3rd Infantry Division as a translator in April 1951. Having studied foreign languages from an early age, I was fluent in English. I was with the Americans when they defended Cheorwon, Gangwon and took to calling myself the governor, a habit the Americans picked up. And that’s how, thanks to the war, I achieved greater success as a politician than most do in a lifetime.