AS Monaco ties Incheon in friendly

AS Monaco ties Incheon in friendly 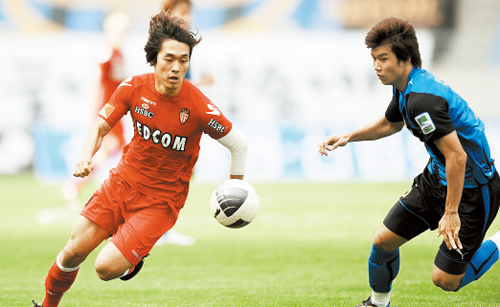 AS Monaco forward Park Chu-young attempts to get past an Incheon United defender in a friendly match held at the Incheon World Cup Stadium yesterday. Park was substituted into the match in the 75th minute. [NEWSIS]


Park Chu-young got limited playing time in front of 13,613 fans yesterday afternoon as AS Monaco tied Incheon United at two goals apiece in a friendly match held at the Incheon World Cup Stadium.

The friendly match was supposed to have been an opportunity for football fans to see one of their World Cup heroes in action, and AS Monaco manager Guy Lacombe had promised an “entertaining game for the fans” at a press conference at Incheon International Airport upon his arrival here on Saturday.

But Park, the AS Monaco forward, was said to have been suffering from abdominal pain and he spent the majority of the match in street clothes watching from the sidelines until he was substituted into the match in the 75th minute.

Brazilian forward Nene was also missing from the lineup.

Despite the long flight, the lack of preparation time and the absence of two of its regular forwards, AS Monaco got off to a quick start.

Daniel Niculae opened the scoring in the 21st minute and captain Alejandro Alonso added another goal in the 32nd minute.

Incheon United responded in the second half. Do Hwa-sung finally put Incheon on the board in the 64th minute when his long range chip shot from 55 meters (180 feet) out went sailing over the head of goalkeeper Sebastien Chabbert. Lee Se-joo added the equalizer in the 84th minute.

In another international friendly match, the Suwon Bluewings hosted the Urawa Red Diamonds of the J-League last night.

The K-League resumed its regular season on Saturday after a monthlong break for the 2010 World Cup. Jeonbuk Motors defeated Daegu 4-0 with two goals apiece from Krunoslav Lovrek and Lee Dong-gook. Pohang and Chunnam ended their game in a 1-1 draw.