A break from the heat - and the cliches of cinema

A break from the heat - and the cliches of cinema 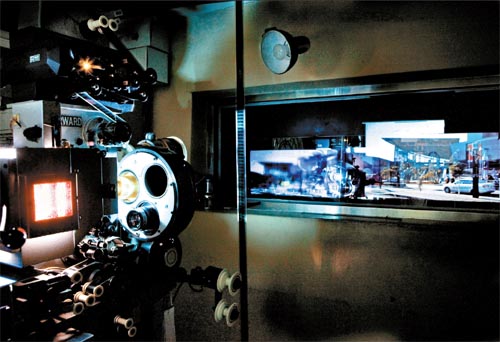 Even the film projector at Silver Theater, which screens a program tailored for senior citizens, adds to the nostalgic atmosphere. By Kwon Hyuk-jae

There’s no better way to escape summer’s heat than with a movie in a air-conditioned theater. But if you feel the summer blockbusters are an artistic wasteland, you might prefer a trip to one of Seoul’s many art houses. Some specialize in French or Japanese films, another in classics for the older generation, and yet another in retrospectives for serious film buffs and students. All offer a cinematic experience far outside the mainstream.


Cinecube Gwanghwamun Even better sound and quality than the multiplex

Among all of Seoul’s small theaters, Cinecube Gwanghwamun is the only one comparable to a multiplex in terms of facilities. While most small theaters only have one viewing room, this one has two. Room 1 has 291 seats, a large screen and a sound system comparable to mainstream theaters. It was designed with high ceilings and large hallways, creating a peaceful atmosphere meant to recall that of an art museum. There’s even artwork from Iljoo & Sunhwa Gallery on the walls for visitors to enjoy while they wait for their film to start.

Cinecube is famous for featuring European art films that fall under both high culture and popular culture. In 2001, the theater presented the French film “The Taste of Others,” which sold over 1 million tickets here. In fact, according to a Korean Film Council survey of 1,202 people who frequently visit small theaters to see art films in July 2008, Cinecube Gwanghwamun was the favorite theater for independent films in Korea. Although last September Cinecube came under new management when Taekwang Industrial Company bought the theater, it has maintained its esoteric focus.

Cinecube Gwanghwamun is located in the basement of the Heungkuk Life Insurance Building, across from the Seoul Museum of History.

This colorful venue is run by a film distributor called Sponge, which specializes in importing Japanese films. It is known for featuring unique flicks such as “Josee, the Tiger and the Fish” (2003), and “La maison de Himiko” (2005). Seoul’s Japanese Indie Film Festival is held here every year. Although there were once three Spongehouse theaters in Apgujeong, Jongno and Gwanghwamun, today only the last theater is still open. Still, the die-hard fans of this theater match those of Cinecube Gwanghwamun in their number and devotion.

From the street, Spongehouse Gwanghwamun doesn’t look like a theater at all. Instead, it resembles an open coffee shop, with glass walls revealing the lobby. In fact, the theater has a coffee counter that sells both alcoholic drinks and movie tickets. Next to the counter is a hallway that features a metal sculpture gallery.

Spongehouse Gwanghwamun is located on the first floor of the C’square Building, behind the Koreana Hotel.

Located on the first floor of the Dongsoong Art Center, Hypertech Nada shares a building with the Kokdu Museum, a concert theater, cafes and more, all blending together to create a lively cultural mood. Half of the theater space is taken up by a sparkling, casual cafe that balances out the stiff interior of the other half. The viewing room also offers something unique - one wall is made of glass, which allows the audience to enjoy the scenery outdoors before the curtains close. Each seat in the theater is marked with the name of 120 celebrities of Korean culture, such as the figure skater Kim Yu-na and the singer and actor Jung Ji-hoon, commonly known as Rain.

Although the mood at Hypertech Nada is artistic, the movies it screens are realistic. It lives up to its slogan “Nada is Docu,” featuring countless documentary films. A different documentary screens every Wednesday at 8:20 p.m. The theater also screens French films every Tuesday at 8:20 p.m., in a partnership with the Centre Culturel Francais. At the end of each year, the theater replays all the movies that were featured throughout the whole year.

Hypertech Nada is located on the first floor of the Dongsoong Art Center.

Left to right: a view of Spongehouse Gwanghwamun from the front and the hallway of art at Cinecube By Kwon Hyuk-jae

The Film Forum, as the name implies, aspires to serve as a place to screen and discuss great works of cinematic art. It frequently holds retrospectives of famous old masters, such as Orson Welles, Alfred Hitchcock and Jean-Luc Godard, and it also plays films by small directors with big potential.

Inside the theater, there is a cafe that sells movie-related books, as well as various novels and magazines. Entrance to the book cafe is only permitted if you buy a drink at the counter next to the ticket booth. Film Forum is also famous for its seminars, where people meet to discuss and study film. Famous movie critics are frequently invited as guest speakers.

Film Forum is located in the Hanisol Building, behind Ewha Womans University.

Although this is an art theater, it is rather nontraditional, as it plays light and pleasant movies. Located in front of Hongik University, Sangsang Madang plays independent films and is known for attracting younger viewers with its art festivals. At the beginning of September every year, it hosts the Amazing Short Film Festival, and at the end of each year, it holds a music film festival. In the corner of the theater, there is a special area for comic books that can’t be found elsewhere in Korea, from the classics to the unfamiliar gems - even Marvel Comics from the United States. In fact, the comic books at Cinema Sangsang Madang are so well known that many come just for them, not for the theater itself. Yang Ik-joon, the director of “Breathless,” is one regular visitor. 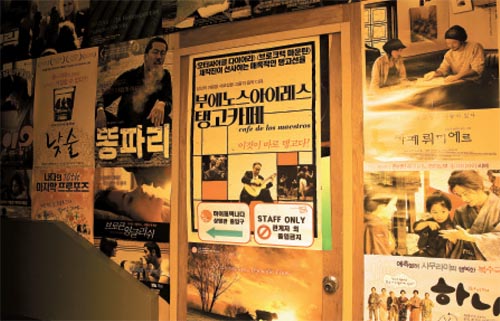 Silver TheaterClassics for the older generation

Silver Theater is known for only screening classic films the appeal to older people. It was established to cater to senior citizens over the age of 60. It plays old Hollywood and Korean classics, such as “The Indiscreet Madame” and “For Whom The Bell Tolls.” There are also other services provided in the theater tailored for older patrons.

A ticket is 8,000 won for regular customers, but only 2,000 won for those over the age of 57. In front of the theater, there is a rest area called Making Memories, where a D.J. plays old records and gives away free gukhwa buns. The Silver usually screens three movies per day, with the last one scheduled at 3 p.m., since older people tend to turn in earlier in the evening.

Silver Theater is located on the fourth floor of the Nakwon Market.

Located next to Silver Theater on the fourth floor of Nakwon Market is Seoul Art Cinema, operated by the Korean Association of Cinematheques.

The role of KACT is to preserve classic films as cultural heritage and help the public see them. In this theater, every movie is screened like an exhibition. As the theater shows only classic movies by distinguished directors, it is a haunt of film fans and students.

The targets of KACT’s restrospectives have included Elia Kazan and Federico Fellini. Events tend to last from two weeks to a month. As the theater must borrow the films from foreign companies, it is contracted to screen them only twice a day.

This small venue, located in front of Hongik University, doesn’t look like a movie theater. In fact, it only seats about 40 to 50 people, and the movie screen is only the size of one you might find in DVD room. However, it plays domestic movies so unique that they can’t be seen at any other theater. It often screens movies and media arts that cater to women and minorities, such as homosexuals and foreign factory workers.

For example, earlier this year it screened retrospectives on lesbian filmmaker Barbara Hammer, and so-called dance films in which there is no sound, and the plot is carried on only by movement. Igong is worth visiting if you are seeking an unusual experience.