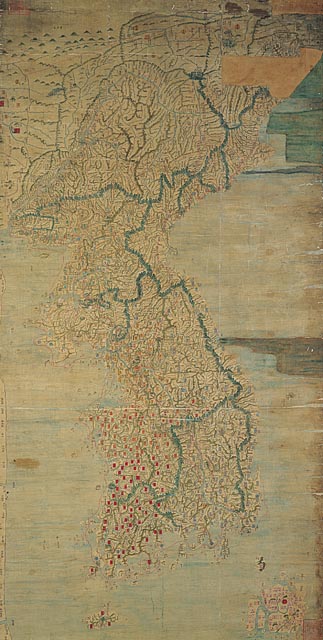 Based on the Map of Korea, which is produced by theJoseon-era cartographer Jeong Sang-gi, this map is a map of Korea. It includes northern part of the nation, which had never depicted in other maps before. SinceJeong used a scaling device called ‘100-ri ruler’, the overall accuracy of the map was greatly enhanced. Symbols are used to mark important geographical information; main overland and sea routes are shown.

Jeong Sang-gi was a geographer who left behind remarkable achievements in development of map. His innovative ‘100-ri ruler’ opened a new chapter in scientific cartography. Also a map produced by Jeongand his son was highly praised over a contemporary map that was made by government. And it greatly influenced to a work of another Joseon-era cartographer Kim Jeong-ho when he created the Territorial Map of the Great East in 1861.