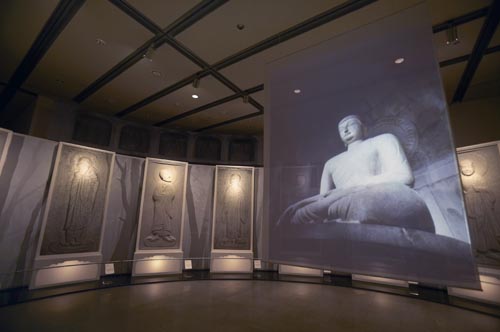 A digitally restored three-dimensional image of Seokguram Grotto at the National Museum of Korea. By Park Jin-ho

Visiting the Seokguram Grotto, a Unesco World Heritage site in Gyeongju, North Gyeongsang, is no easy task. You have to climb up a number of stairs and when you arrive, the structure, which houses some of the best examples of Buddhist sculpture in the world, can only be seen through a glass wall.

Early last year, however, the historic site was brought to life in the middle of Seoul as a 3-D model. There were no stairs to climb, and curious visitors could explore the grotto from a variety of angles.

The model, organized by the National Museum of Korea, is part of an ongoing movement to preserve Korean cultural assets through digitization.

Beginning with Bulguksa in 1999, many of the country’s national treasures have already been digitally restored, including the Tomb of King Muryeong, which houses the Baekje-era king and his wife; Hwangnyongsa, a nine-story temple that was the center of Korean Buddhism during the Silla and Unified Silla periods; and the murals that are part of the Complex of Goguryeo Tombs, Korea’s first World Heritage site.

Another landmark of the digital preservation movement can be found in Andong, North Gyeongsang. The Traditional Cultural Contents Museum there doesn’t have any tangible cultural relics in its collection. But it has catalogued an array of three-dimensional artifacts that allow visitors to get closer than they ever have to these historic pieces. Located in the small city of only 170,000 inhabitants, the museum has attracted over 120,000 visitors since it opened in September of 2007.

The digital restoration technology used in these and other projects in Korea was first applied to a foreign cultural asset in 2006, when a digital version of Angkor Wat was created by the Korea Advanced Institute of Science and Technology in a project led by senior researcher Park Jin-ho.

In digital restoration, data is first obtained through a 3-D scanner. Researchers then consult historical records and experts specializing in archaeology, art history and other fields to accurately depict the original relics.

The technique also uses a 2K camera, the same kind used for the movie “Avatar,” but that has already been replaced by newer technology. In Japan, for example, a 4K camera is used for digital restoration work.

“Although our country is a powerful nation in IT, it falls behind Japan and the U.S., and stands parallel with China, in the field of digital restoration of cultural assets,” Park said. “With the lack of continuous financial investment and human resources we haven’t been able to work on any additional cultural relics overseas [following Angkor Wat].”

With the recent advances in digital restoration technology, Korea could soon be left behind. The Tokyo National Museum has already developed digitally restored versions of relics such as the Sistine Chapel ceiling and the Forbidden City of China.

To stay competitive, Park said Korea needs to do more.

“We must go beyond 3-D technology, such as holograms, to recreate cultural relics that make visitors feel as if they are looking at the original pieces,” he said. “I believe that we have the research and administrative capability to lead the world in the digital restoration of these cultural relics.

At the World Conference of Arts Education 2010 in May, Korea showed the progress it has made through a project called “Digilog Samulnori,” written by former culture minister Lee Eo-ryeong.

Life-sized hologram avatars played the four percussion instruments that are integral to the form as digital flowers responded to their sounds and movements. Audiences were captivated. And unlike their human counterparts, the holograms of musicians Kim Duk-soo and An Sook-sun can still be seen in 100 years, which greatly extends the possibilities for cultural preservation of the performing arts.

“After the performance, a U.S. company asked us to create a hologram of Michael Jackson. The project is still in negotiation,” said Lee Woo-hyun, the director of d’strict, the digital media content provider that created the digital performance, said. “We are also looking into creating holograms of our own national cultural assets.”

Meanwhile, the Cultural Heritage Administration of Korea is strengthening its digital heritage collection.

It launched a YouTube channel earlier this month (http://www.youtube.com/user/koreanheritage) with video clips of Gyeongbok Palace and other historic sites, and its Heritage Channel (www.heritagechannel.tv) will be up and running next month.

“We will be creating 3-D virtual realities in which visitors can walk into a digitized version of the ancient city of Gyeongju,” Eom Seung-yong, the CHA director said. “Regional intangible cultural relics halls will be completed in late 2012, and will feature various digital assets.”