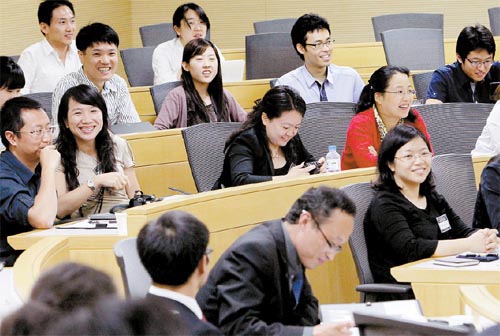 Thirty Chinese judges met with 20 Korea University Law School students to discuss the judicial systems of the two countries at the university’s campus in Anam-dong, northern Seoul, on June 28. By Kim Kyung-bin


Thirty Chinese judges ranging in age from 20 to 40 recently visited Korea to attend a seminar titled “Commerce Disputes between Korea, China and Japan” held at Korea University in Anam-dong, Seoul, on June 28.

This is the first time so many judges from China have visited a Korean law school to learn about Korean law.

The seminar focused on the possibility of a free trade agreement between China and Korea and its legal implications.

“A free trade agreement between Korea and China can mean more than an open market,” said Professor Park No-hyeong from Korea University Law School. “The movement of products, services and capital will also be free, along with the movement of crimes and criminals. There is a possibility that terrorism and drug trafficking could occur between the two countries, and this will all go to the courts.”

The judges are participating in the Chinese government’s year-long Master of Law program at the City University of Hong Kong. As part of the program, they are also taking a month-long course at Columbia Law School. They were in Korea for a week.

After the seminar there was a discussion for the 30 judges and 20 Korea University Law School students.

The session began with an introduction of the Chinese legal system presented by Judge Li Shawi, 44, who is the head of civil cases at the Jiangsu High People’s Court.

“Korean corporations trying to invest in China lack an understanding of the Chinese legal system, so they are unprepared for lawsuits,” Son said.

Meanwhile, Judge Shong Yien, 29, assured the students that rulings made in China would be trustworthy.

“As a member of the World Trade Organization, China respects the related regulations, so it is safe to trust the judgments of the Chinese court system,” Judge Shong said.

The judges discussed several examples of the kinds of cases they might confront in the future.

One was a case against a Korean enterprise.

“There have been many examples of oil contamination by ships belonging to Korean enterprises since the year 2000,” Judge Ping Yang Tanquo, 32, from the Guangzhou Maritime Court, said. “In one incident, $5 million compensation was awarded, which raised a controversy over compensation limits.”

Another case involved a Korean company that built a factory in China, then left without paying the workers.

The judges then asked the students about their career paths, the Korean judicial system and regulations on administrating the law in Korea.

The judges stayed in Korea until July 5, and took seminars on the National Assembly, Supreme Court of Korea, Constitutional Court of Korea and private law firms. They also met with Korean judges.

“The judicial branch contributed a great deal in a short period to the development of Korea’s economy,” Judge Shong said. “Companies like LG and Samsung were able to grow as global groups because the law protected them from illegal infringement cases, which increased trust among foreign investors.”