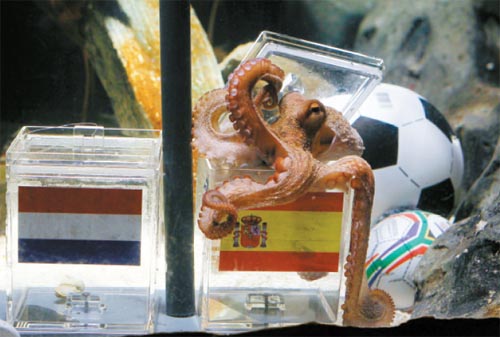 Octopus Paul predicts Spain’s 2010 World Cup victory by opening a box and choosing a mussel from a box bearing the Spanish flag. [REUTERS/YONHAP]

BERLIN - Salty soothsayer Paul, the “psychic” octopus, finished the World Cup with a flawless record as Spain’s 1-0 win over the Netherlands in Sunday’s final leaves him with eight perfect predictions.

In the now familiar routine, two boxes were lowered into his tank last week, each containing a mussel and the flags of the two opposing teams. Paul went straight to the correct box both times, wrenched open the lid and gobbled the tasty morsel.

But the art of football predicting has become a dangerous job for the English-born clairvoyant. He fell offside with bitter German fans who threatened to turn him into sushi after he predicted a semifinal defeat for the Mannschaft against Spain. Paul’s home, an aquarium in western Germany, has received death threat e-mails saying “we want Paul for the pan,” said entertainment supervisor Daniel Fey.

No less an authority than Spanish Prime Minister Jose Luiz Rodriguez Zapatero has called for octopus bodyguards. Spanish Industry Minister Miguel Sebastian has called for the creature to be given an “immediate” free transfer to Spain to “ensure his protection.” Stung by Paul’s “treachery” at picking Spain over Germany in last Wednesday’s semifinal, some sections of the 350,000-strong crowd watching the game on giant screens in Berlin sang anti-octopus songs.

The honor of Paul’s mother was called into question, according to witnesses.

His prediction of a Spanish victory is expected to be the last for Paul, who in octopus terms is a pensioner, at the grand old age of 2½. Octopuses generally live 3 years at the most.