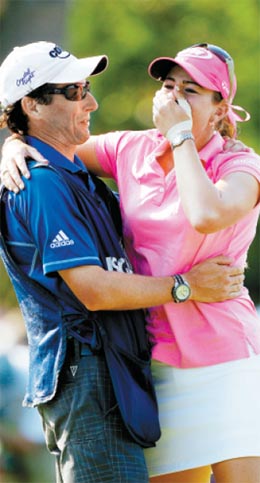 OAKMONT, Pennsylvania - American Paula Creamer won her first major on Sunday by taking the U.S. Women’s Open at Oakmont Country Club after pulling away from her rivals for a four-stroke triumph.

The victory fulfilled the great expectations placed on the 23-year-old Creamer, who had won eight times on the LPGA Tour but had been frustrated by near-misses in the big events.

Creamer, wearing her signature pink outfit for the final round, shot a two-under-par 69 for a three-under-par 281 total and was the only player in the field to better par.

Pettersen birdied the last for her closing 69, while 22-year-old Choi fired a 66, boosted by an eagle-three at the par-five ninth hole.

It was an especially sweet and well-earned victory for Creamer, coming on a vaunted Oakmont course that had hosted 12 previous majors and after surgery to repair a torn ligament in her left thumb that made her hand ache.

When her short par putt on the last fell in the hole, Creamer covered her face in her hands and wept with joy as she hugged her caddy, playing partners and parents on the green.

“It’s been an amazing ride,” Creamer told a TV interviewer.

Creamer acknowledged that her thumb had throbbed with pain during the round and said she was proud that she stuck with her game plan and executed the shots she needed.

“It will be nice to rest with the U.S. Open championship next to my name,” a beaming Creamer said.

Creamer was among 33 players who had to return early on Sunday morning to complete the third round of the storm-hit event.

Ahead by three shots when she returned for her last five holes of the third round, Creamer never relinquished her lead in 23 holes of golf on Sunday although her advantage shrank to two shots during the final round before she pulled away.