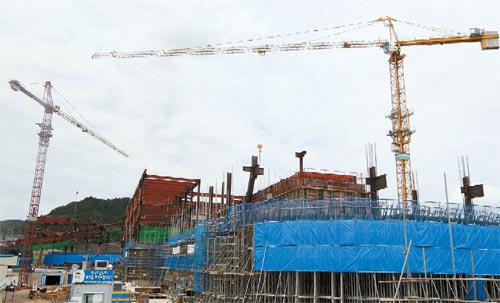 Construction of the new government complex in Sejong City in South Chungcheong continues yesterday as the Lee Myung-bak administration announced which government offices would move to the new administrative hub. [YONHAP]


A total of 35 state agencies will be relocated to Sejong City by the end of 2014, including the Prime Minister’s Office and the Finance Ministry.

After years of struggle over the plan, and the defeat of the Lee Myung-bak government’s attempt to make Sejong an industrial and science hub instead of a mini-capital, the government yesterday announced the list of offices moving out of the capital region.

“We have decided to relocate the government agencies to Sejong City by 2014 in line with the initial plan,” the Public Administration Minister Maeng Hyung-kyu said in a briefing yesterday. The late former president Roh Moo-hyun originally proposed a new administrative capital about 150 kilometers (93.2 miles) south of Seoul to unclog a capital city crowded with most of the country’s government, industrial and commercial activities. Roh’s plan was passed into law in 2005, although the number of offices to be moved has shrunk from 49 to 35.