Bluewings strive to bust out of doldrums

Bluewings strive to bust out of doldrums 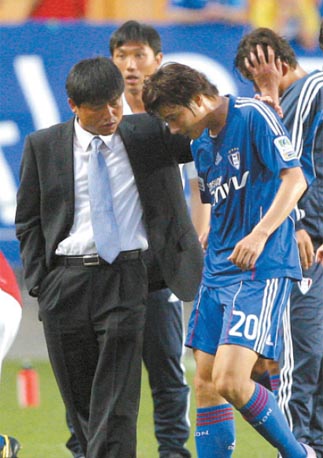 Suwon Bluewings manager Yoon Sung-hyo speaks to one of his players at the end of the first half of the friendly against the Uwara Red Diamonds Sunday at Suwon World Cup Stadium. [NEWSIS]

With the Suwon Bluewings set to resume their 2010 K-League regular season after a World Cup break, their new manager Yoon Sung-hyo is keen on returning his club to its past glory.

“I want to return the team to the standard of excellence set during the 1999 season when the Bluewings won the league title and swept all tourneys,” said Yoon.

The Bluewings showed a lot of character that season, coming back from deficits on several occasions to win the league title and all three tournaments. The current squad could use a comeback, as it currently sits dead last in the 15-team K-League with a record of two wins, one draw and eight losses.

As Suwon manager, Yoon follows two notable predecessors, Kim Ho and Cha Bum-kun. Both were former national team managers and had success with the Bluewings.

Yoon is one of the original members of the Suwon Bluewings when the club was founded in 1996. He notched 23 goals and 14 assists during his playing days and served as the team trainer during the dominant 1999 season. To return some of the confidence and power of past squads, the 48-year-old manager is emphasizing improved passing and trust among the players and coaching staff.

“When I first took over the team at the training camp in Gangneung, Gangwon, the team’s confidence was rather low,” said Yoon. “They were tentative in their approach, thinking one mistake could take them out of the starting lineup.

“Part of the big reason for the success of the 1999 season was due to the strong sense of faith the coaching staff had placed on its players.”

Yoon also promised an attack-minded game featuring tight and accurate passing to draw fans back to the stands.

“I want my team to forge ahead with good passing work to win over fans rather than make back passes or long passes,” said Yoon. “During our 10-day training camp in Gangneung, I directed a lot of energy into our team’s pass work.”

A firm believer in his players, Yoon is planning on featuring a 4-1-4-1 formation with one forward. In an international friendly against the J-League’s Urawa Red Diamonds, Suwon showed flashes of what Yoon has been preaching. Led by a midfield group consisting of Kim Do-heon, Lee Sang-ho, Yeom Ki-hun and Baek Ji-hoon, Suwon connected on crisp passes and was in attack mode for much of the first half. Yoon also experimented with switching defensive midfielder Cho Won-hee back to his natural right fullback position and moving center defender Kang Min-soo to the defensive midfield. Suwon still has areas to work on, and they did not look as impressive in the second half. The game ended in a scoreless draw.

Yoon has surrounded himself with former Suwon teammates, making trainer Kim Jin-woo and farm team manager Park Geun-ha his assistants. Yoon has also made it clear he will use veteran goalkeeper Lee Woon-jae as playing coach. The new strategy faces its first league test tonight against Busan I’Park.