Classical music in a pastoral setting

Classical music in a pastoral setting 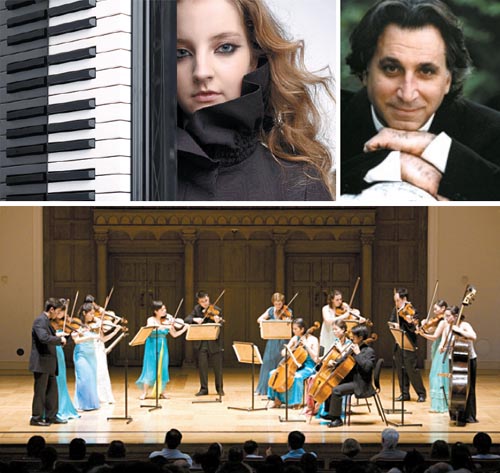 Daegwallyeong, a mountainous area in Gangwon, has long been considered by many Koreans as a haven of peace. In the province that runs along Korea’s eastern coast, pastoral scenes with sheep strolling about an endless prairie are a common sight. Now imagine you are in that prairie as the gentle strains of classical music accompany your meditation.

Classical music lovers in Korea will have an opportunity to have that very experience at this year’s Great Mountains International Music Festival, which is set amidst the peaks of Daegwallyeong and is now in its seventh year.

“The title of this year’s festival is ‘Create and Recreate,’ meaning that original compositions and music based on original scores will be featured together,” said Kang Hyo, who has served as artistic director of the Great Mountains Music Festival since its first edition in 2004.

Kang is a renowned violin teacher who has taught at the The Juilliard School since 1978 and at Yale since 2006.

“Just as human history has progressed with one generation learning from its ancestors and then passing that information on to the next generation, music has progressed in the same way,” Kang said. “I hope that this year’s festival will give people an opportunity to mull over that idea and celebrate it.”

The festival opener reflects this philosophy.

The piece, “Lacrimae Beati (Tears of the Blessed One),” which was written by world-renowned composer Richard Danielpour, is actually based on the first eight bars of “Lacrimosa” from Mozart’s Requiem, which is believed to be the last bars of music that Mozart wrote. Danielpour said he wrote the piece for the Sejong Soloists, a New York-based string orchestra composed of individually-distinguished solo and chamber musicians from nine different countries.

“A few years ago, I had an idea to write a piece for a string orchestra based on the first eight bars of the Lacrimosa from the Mozart requiem and wondered who might be the right group to play this piece,” Danielpour said in a video message released to reporters last week.

“Almost everyone I spoke to mentioned the Sejong Soloists, and I realized what an extraordinary ensemble of musicians this group really is after hearing them play my work last December.

“It was a huge thrill to work with them and to be able to work in great detail with them to bring this piece to life, and I have to say that it is both an honor and a privilege to be a part of the Great Mountains International Music Festival.”

Danielpour will be in town for the festival’s opening performance with Sejong Soloists on July 29.

Another musician in the spotlight at the festival this year is Lise de la Salle, 22, a young and promising pianist from France. She will be visiting Korea for the first time for her performance of Chopin’s “Ballade No. 4 in F minor” on Aug. 7.

The cellist is part of the renowned Chung Trio, along with violinist Chung Kyung-wha and their brother, conductor-cum-pianist Chung Myung-whun,

Also on Aug. 1, Chung Kyung-wha will give an artist talk for festivalgoers called “Intimate Talk with Distinguished Artists.”

The violinist will help to carry out part of the festival’s mission by giving individual music lessons to selected young artists during the festival period.

The young artists she will teach are part of the festival’s music school, which selects 160 young musicians from nine countries around the world to participate in the program. During the festival, they are able to participate in master classes, individual lessons and other festival activities.

*The Great Mountains International Music Festival will run for three weeks from July 23 to Aug. 13 in the area near the Alpensia Resort in Pyeongchang, Gangwon. Tickets range from 30,000 won to 50,000 won for the Distinguished Artists Series featuring world-class musicians, which will be staged at the recently-completed Alpensia Concert Hall. Admission for the Master Class and Intimate Talk sessions is 10,000 won, while the Rising Star Series and student recitals will be free of charge. Reservations can be made through Club Balcony (1577-5266, www.clubbalcony.com), Interpark (1544-1555, www.interpark.com) and Ticketlink (1588-7890, www.ticketlink.co.kr). For more information, call (033) 249-3374 or visit www.gmmfs.com.