Sparks fly and veterans shine in ‘Kiss Me Kate’

Sparks fly and veterans shine in ‘Kiss Me Kate’ 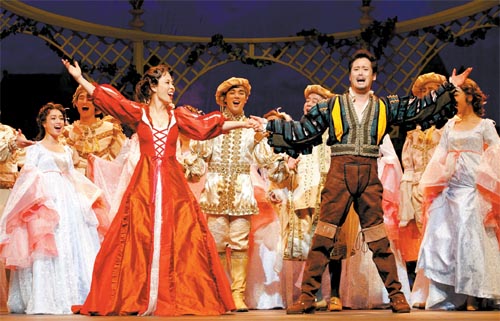 Choi Jung-won and Nam Kyung-ju show their flare as veteran musical theater actors in a new Korean production of “Kiss Me Kate.” Provided by Seensee Company

One of Shakespeare’s most beloved works gets a modern twist in the play within a play that is “Kiss Me Kate,” which is currently running at the National Theater of Korea in a new Korean production.

The show is a revival of the five-time Tony Award-winning Broadway musical and stars some of Korea’s most talented actors, along with special guest Ivy, a popular Korean singer making her musical theater debut.

The director of the Korean production, David Swan, summarized the story at a press conference on July 9 as “an emotional array of love, anger, betrayal and more.”

In the show, Fred Graham (Nam Kyung-ju) is the director of a production of Shakespeare’s “The Taming of the Shrew,” in which he also stars as the male lead, Petruchio. 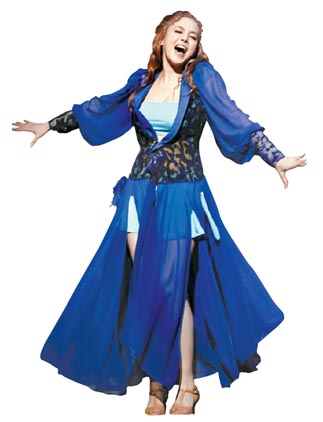 Fred is also the ex-husband of Lilli Vanessi (Choi Jung-won), who has been cast as the female lead, Katherina, in the Shakespeare play.

The main story is set in 1950s Baltimore and the Shakespeare play is set in 16th century Padua.

“Other musicals try to induce people to find new love, but this musical focuses on people that are already in love, which echoes the Shakespearean classic,” Swan said.

Although they have been divorced for over a year, Fred and Lilli still have deep feelings for each other.

They don’t realize it until the young and beautiful Lois Lane (Ivy and Oh Jin-young), who is Fred’s new girlfriend and plays Katherina’s sister Bianca in The Taming of the Shrew, comes between them.

This rather confusing plot is not the most endearing part of the musical.

However, it is the chemistry between Nam and Choi that makes this musical worth watching. As the sparks fly, the two veteran performers show why they are two of the best musical theater actors performing today.

The two also performed together in the first Korean production of Kiss Me Kate in 2001, but Choi was cast as Lois Lane, not as Kate.

Despite the electric performances of the two lead actors, some audience members left the theater on Sunday feeling less than satisfied.

“Although the story combined the modern with the traditional in a creative way, I felt that compared to other musicals put on these days, the setting, including the stage and costumes, was rather dull,” said Son Ru-mi, 26, a student who saw the show that day. “To be honest, I couldn’t wait until intermission.”

Another student, Chun Suk-chul, 28, agreed, saying, “It was a good story, but I wouldn’t see it again.”

If anyone in the audience was there to see Ivy, it is no wonder they left the theater feeling disappointed.

Although she is a good singer, her pronunciation was not very clear and her voice was not strong enough to carry in a theater and she looked like an amateur alongside her more experienced colleagues.

All in all, however, Kiss Me Kate is a fun and witty musical worth watching - once.