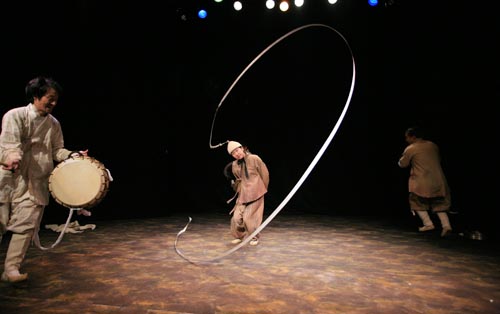 The play “Mirong” is told through movement and music and features a rare staging of traditional Korean court dance. It is showing at Seoul Namsan Gugakdang in central Seoul through Aug. 1. See TRADITIONAL KOREAN PERFORMANCE, below. Provided by Sejong Center for the Performing Arts

To July 23: Musicians will present a different musical style on each night of this performance series. The concert will have a Spanish theme on the 19th and an African and Hawaiian theme on the 20th, and it will feature swing on the 21st, Swedish pop-rock on the 22nd and classic acoustic guitar on the 23rd.

Tickets are free of charge.

A NIGHT WITH ROLAND PETIT

Thursday to Sunday: Choreographer Roland Petit has created dances for some of the best ballet companies in the world.

In this program, he presents three pieces of choreography: “L’Arlesienne,” “Le Jeune homme et la Mort” and excerpts from “Carmen.”

Thursday: Baritone Kim Dong-kyu will explain the background of music as it is played, including Rossini’s “La Gazza Ladra Overture” and Tchaikovsky’s “Variations on a Rococo Theme in A major,” Op. 33 and many more. Perry So, a Dudamel Conducting Fellow with the Los Angeles Philharmonic Orchestra and a sub-conductor of the Hong Kong Philharmonic Orchestra will lead the orchestra.

Their first album, released in 2000 and called “Self-titled Obsession,” was featured in the popular MBC drama “Ruler of Your Own World” and was an instant hit.

After a five-year lull, 3rd Line Butterfly released their fourth album, called “Nine Days or a Million,” in 2009.

July 24:This concert is designed to attract children and students, who have more free time during the summer vacation period. Rossini’s Overture “L’Italiana in Algeri”, Vivaldi’s Piccolo Concerto in C major, RV. 443, and Mozart’s Flute Concerto No. 2 in D major, K. 314, will be played. There will also be an explanation to help children and students understand the music.

To Aug. 1: This play was selected as one of the best acts of the World Festival of National Theater in 2009. “Mirong” features traditional Korean court dance, or jeongjae. Because of their large and extravagant scale, court dances are difficult to recreate and are usually only seen at royal palaces. Although Mirong doesn’t make use of a large cast or expansive production elements, it still manages to exude the essence of a royal Korean court dance. The story is largely told through movement and music, rather than verbally, making it easier for non-Korean speakers to understand.

Performances begin at 7:30 p.m. on Thursdays and Fridays and at 3 p.m. on Saturdays and Sundays.

SOUND OF HEAVEN AND SOUND OF THE LAND

THE TWO GENTLEMEN OF VERONA

To Aug. 28: This romantic comedy was the first play Shakespeare presented to the world.

To Aug. 29: Best-selling author Bernard Werber is also the author of the play “Nos Amis Les Humains.” Since its first performance in Paris in 2004, it has received glowing reviews from both audiences and critics.

Performances begin at 8 p.m. Tuesdays to Fridays, at 4 and 7 p.m. on Saturdays and at 4 p.m. on Sundays. The theater is dark on Mondays.

July 21 to 25: One hundred and fifty winners of 270 competitions overseas in 10 countries including France, Japan, China, Russia and Italy come to Korea to become world dance champions. The Seoul International Dance Competition first started in 2004 and became the biggest dance contest of its kind in Asia.

Aug. 12 to 14: A new, large-scale Korean production of Giacomo Puccini’s opera “Turandot” is coming to Seoul in August after its inaugural performance in Jeju at the end of the month. The production will feature internationally well-known foreign opera singers, including Anna Shafajinskaia in the role of Turandot. The orchestra will be led by legendary conductor Lorin Maazel.

Tomorrow to July 25: One of Korea’s three largest film festivals, with its counterparts in Jeonju and Busan, Pifan focuses on genre film: horror, sci-fi, fantasy and animation. This year’s opening film is “The Experiment” with Adrien Brody, a remake of a 2001 German thriller based on the infamous Stanford Prison Experiment. The festival also includes a retrospective of the “Mobile Suit Gundam” anime series, the first ever to be organized by studio Sunrise outside of Japan, including the most recent addition to the series, “Day of the Unicorn,” along with Walt Disney Pictures’ first Russian-language film, the action fairy tale “The Book of Masters.” In Korean film, another section spotlights Lee Doo-yong, who revolutionized Korean action filmmaking in the 1970s. A host of social events rounds out the week.

Tickets to most screenings cost 4,000 won.

Friday and Saturday: Tattoo artists from across Korea and Japan will gather this weekend for a festival that celebrates tattoo artwork and urban culture.

Visitors will have the chance to get tattoos from internationally famous tattoo parlors such as Three Tides Tattoo and Sword of Lebel.

In addition to the live tattooing events, there will be live band and D.J. performance on Saturday night. Musicians include Korean rockabilly band The Rock Tigers and indie rock band Kwon Milk.

Saturday to July 25: The 13th Boryeong Mud Festival will be held at Daecheon Beach on South Korea’s western coast. Boryeong is famous for its abundant natural resources and beautiful scenery, and Daecheon Beach is one of the largest and best swimming beaches in the country, with more than 10 million visitors annually. The festival offers a chance to bathe in a massive mud tub, receive mud massages, compete in the “Mud King” contest and participate in a mud photo contest. Tourists will also be able to buy various mud cosmetic products at discounted prices.

July 30 to Aug. 15: Forty-two theatrical groups from 10 countries will present plays at outdoor theaters in the town of Wicheon, Geochang County, during the 22nd Keochang International Festival of Theater. The Keochang International Festival of Theater has played an important role in bringing local plays to a world audience and developing South Korea’s dramatic arts industry since 1989. Geochang also boasts beautiful scenery, and is surrounded by the famous Jiri, Deogyu and Gaya mountains.

From Seoul, take a cross-country bus to Geochang.

From Seoul, take the Bundang line to Ori Station. Shuttles are available from there.