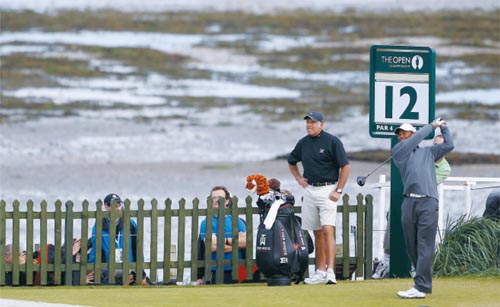 Tiger Woods tees off on the 12th hole at the Old Course, St. Andrews, Scotland on Monday. [AP/YONHAP]

ST. ANDREWS, Scotland - Golf’s greatest players gathered Monday for practice rounds at the sport’s birthplace, testing out the Old Course before Thursday’s start of the 150th anniversary of the British Open.

History will be made on the legendary links where Jack Nicklaus won twice, Bobby Jones and Seve Ballesteros collected crowns and Tiger Woods roared to victory in epic form in 2000 and 2005.

“It all started here,” Scottish golfer Andrew Coltart said. “It obviously means a lot to anybody who has crossed the Swilcan Bridge to play here.”

After a five-month hiatus in the wake of a sex scandal, Woods is off to the worst season start of his career, winless in his first six events of the year. Woods shared fourth at the Masters in his return to golf and matched that showing in June’s US Open.

“Everyone has had distractions in their lives,” Woods said. “I think that my life out here on tour is becoming more normalized getting out here and talking about the game of golf.”

Woods said of the Old Course, “It’s just an amazing, amazing test of positioning your golf ball. In order to get to a lot of the flags, you have to put the ball in the correct spot to have angles.”

Scotsman Colin Montgomerie, second to Woods on the Old Course five years ago, warned that Woods has every chance to become the first three-time Open winner at St. Andrews if his touch on the greens returns.

“He knows the course well enough,” Montgomerie said. “If he brings that fantastic putting stroke of his to the course, he’ll have every chance to win again.”

Reigning Masters champ Phil Mickelson, who could overtake Woods to become the world No. 1 for the first time, seeks a fifth major title and says he might claim his first Claret Jug if he can master the greens of St. Andrews.

“I feel like I should have a good chance,” Mickelson said. “The thing I’ve struggled most with has actually been the greens. It’s a stronger grass and I haven’t adjusted properly. If I can change that, I should be able to contend.”

Mickelson plans to strike the ball with more force than at most majors because distance eliminates more deadly bunkers over the course’s 7,305-yard layout. “I’ve had dreams of winning the British Open ever since I was a kid and came over in ’91 and played at Royal Birkdale,” Mickelson said. “It’s a tournament I want to win regardless of what setting, but I’ve read Jack Nicklaus saying that there’s nothing more gratifying than winning The Open Championship at St. Andrews.”

“The first time I played it, in one particular wind there were bunkers that were not in play,” Mickelson said. “I wondered, ‘Why is this bunker 80 yards out of play?’

“When I played it a couple of days later and had an opposite wind, it was those bunkers that were in play. It was fascinating to me at how well placed and strategic a golf course it was, regardless of which wind you received that day. The most intriguing element is that it was so well thought out.”

Ballesteros, the Spanish legend who underwent surgery for a brain tumor in 2008, pulled out of a planned appearance at St. Andrews this week on the advice of doctors. The five-time major champion won the Open in 1984 at St. Andrews.