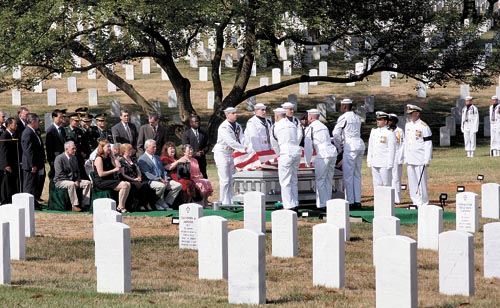 A Navy honor guard carries the casket of U.S. Navy Ensign Robert Langwell, who died in the Korean War at the age 26, to a burial site in Arlington National Cemetery in Arlington, Va., on Monday. Langwell was one of two sailors missing after the USS Magpie struck a mine off the coast of Chuksan-ri, South Korea, on Oct. 1, 1950. His remains were recovered by a Korean excavation team in June 2008 and later identified by a U.S. team. [YONHAP]