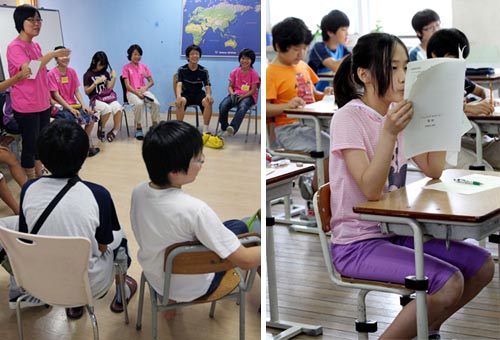 Two Different Pictures - Left: Elementary school students from Mapo, Seoul sit in a circle at Sungmisan School, an alternative school, while they participate in a special program instead of taking part in the National Assessment of Students’ Academic Performance yesterday. 433 students nationwide chose to sit out the exam.
Right: Sixth graders at Choongmoo Elementary examine their test papers for the national assessment yesterday. A total of 1,930,000 students will be graded upon their skills in basic subjects including Korean, English and mathematics. [YONHAP]


The battle over the controversial National Assessment of Students’ Academic Performance test escalated yesterday, and the exam, along with the Education Ministry that has been promoting it, appear to have won out.

Out of 1,930,000 students nationwide who were required to take the test by the ministry, only 433 chose to sit it out.

The two-day test, which measures competence in basic subjects like Korean and mathematics, was instituted by the Ministry of Education, Science and Technology in October 2008 to “better understand which factors impact academic ability and thus assist school efforts to raise student performance levels,” according to a policy plan released by the ministry.

However, liberal education administrators and teachers - traditional supporters of opposition parties - dislike the compulsory test and say that students and their families should have the right to decline to take it.

In many districts, including Seoul, liberal officials were elected last month to lead school systems, with many facing off against the ministry over the exam.

Some liberal educators encouraged students to skip it, while others organized events for students to attend instead.

A group of 17 students and their parents from schools in North Chungcheong embarked on a field trip to an alternative school, with a non-traditional curriculum, in Jecheon. Another group of 30 students from Busan participated in a special program.

However, one program organized yesterday in Nowon, Seoul, collapsed after half of the students participating changed their minds and went back to their schools after hearing that the Seoul education office was changing its stance on punishment for students who skipped the test. Liberal Seoul education superintendent Kwak No-hyun had originally opposed any punishments but made an about-face after receiving additional warnings from the education ministry the day before.

The education ministry can’t technically punish students for skipping the exam, but it has stated that students who chose to do so would be marked as “absent without notice.” For each day a student is absent without leave, a point is deducted from his or her grade point average.

Other regions with liberal education superintendents - Gangwon and north Jeolla - decided not to punish students who skipped the exam.

The ministry though has threatened “legal action” against schools that encouraged students to opt out.

The education office in Gangwon was found to have handed out ministry notices to schools that deleted references to punishment for students who skipped the test, and added a request for schools to “provide special programs for students unwilling to take the assessment.”

“These children are not fully mature or aware enough to choose whether or not to take the exam,” said a sixth grade teacher in Seoul. “The test is a way to show where your school and students are on the national education scale.”