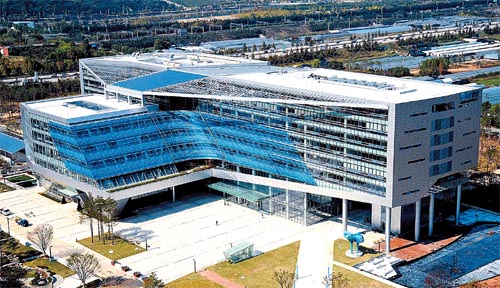 
For the first time, a local mayor has declared a moratorium on repayments of debt run up by his predecessor.

On Monday, Seongnam Mayor Lee Jae-myung declared a moratorium on repayments on 520 billion won ($429 million) in debt after he failed to come up with a way of paying for a new luxury city hall complex and several other construction projects.

“As soon as the city government finished calculating the amount of money spent for Pangyo New Town, it found it needs to pay back 520 billion won to the Korea Land and Housing Corporation and Ministry of Land, Transport and Maritime Affairs,” Mayor Lee said. “But it can’t pay it back in a lump sum in a short period of time with the city government’s current budget status.”

Lee blames predecessor Lee Dae-yub for building exorbitant projects, and told media yesterday he will hire private accountants to audit whether the 520 billion won was used for appropriate purposes.

“I will thoroughly examine the city of Seongnam’s financial conditions to prove to the public that the moratorium wasn’t an exaggeration of our fiscal pain,” Mayor Lee said.

The mayor also said he may sell the headquarters, which was completed last December.

His successor has also decided to review his predecessor’s 860 billion won project to build 24 eco-parks in the city.

Observers worry that Seongnam might be merely the first local government that faces default or moratoria on debt from overambitious projects planned by their predecessors.

The Prime Minister’s Office and the Ministry of Public Administration and Security are now struggling to come up with measures to deal with the unprecedented default.

“As it is likely that such phenomenon will persist in every election season, there’s a need for the Ministry of Public Administration and Security and other related government ministries to adopt measures that will systematically help policies pursued by predecessors to continue.”

An official at the Korea Land and Housing Corporation, co-partner of Seongnam’s Pangyo New Town development project, said Lee was making an excuse to postpone paying the debt.

The state-run land and housing corporation needs to collect 230 billion from the city of Seongnam. The money was used for paving roads and building parks and other public recreation facilities for residents.

“Given the current financial status of the Korea Land and Housing Corporation, it needs to get repayment in a lump sum as soon as possible,” said Park Seong-ok, a senior official with the corporation.

The Ministry of Public Administration and Security said Lee’s announcement is “a political show.” Jeong Heon-yul, a senior official at the ministry’s local finance and taxation bureau, said in a press briefing yesterday, “Seongnam city government’s moratorium is rather excessive.”

“Seongnam’s financial status isn’t that bad given that its tax revenue was up 10 percent in May from the same period last year,” Jeong said. “The Seongnam government’s moratorium has no legal grounds and it’s just a politically motivated declaration.”

“To curb local government from lavishly using their budgets, the ministry will toughen monitoring of governments in an effort to block them from building luxury government complexes and holding reckless events and festivals,” Jeong said.

“Mayor Lee Jae-myung’s moratorium has nothing to do with the new government complex construction, and it’s just aimed to hurt Lee Dae-yub,” the councilor said.