Peering through a second Korean Eye

Peering through a second Korean Eye 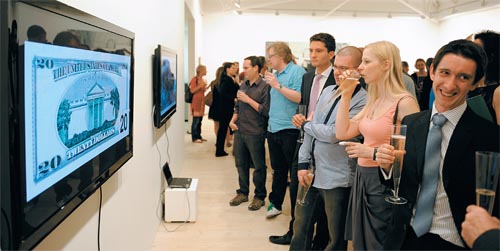 Viewers look at the “White House” and “Welcome” by Jeon Joon-ho, at the opening of “Korean Eye: Fantastic Ordinary” at the Saatchi Gallery in Chelsea, western London, on July 5. By Jorge Herrera, provided by Korean Eye


LONDON - Two exhibition halls at the famed Saatchi Gallery in London were packed on July 5, with Korean artwork and the people who’d come to see it.

They gathered around the translucent sculptures made of soap crafted by Shin Mee-kyoung. They gazed for a long time at a media art piece by Jeon Joon-ho, featuring an enlarged North Korean bill with a hidden image depicting helicopters carrying signs to a mountaintop.

It was the opening of the second annual “Korean Eye” show, which runs until next Wednesday at the contemporary art gallery located in the affluent and historic neighborhood of Chelsea.

Describing the second Korean Eye show, Nigel Hurst, CEO of the gallery, said, “This year looks more consolidated with extra space given to the artists.”

Last year’s exhibition was an unexpected success, and Hurst said the Korean Eye project “will culminate in a full-scale exhibition that will use the entire Saatchi Gallery as a platform to display new Korean art during the summer of 2012.” 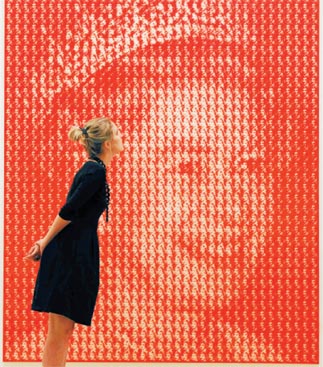 A woman looks at Kim Dong-yoo’s painting “Elizabeth II vs Diana,” a giant oil portrait of Britain’s Queen Elizabeth made up of scores of faces of Diana, the late Princess of Wales. [REUTERS/YONHAP]

Tim Miller, director of Standard Chartered and chairman of Standard Chartered First Bank Korea, the Britain-based financial company that is the main sponsor of Korean Eye, said, “We are very excited because we will have a show in the whole Saatchi Gallery when the London Olympic and Paralympic Games are held, with Mr. Charles Saatchi himself curating the exhibition.

“It will be a huge opportunity for Korean young artists,” Miller added. Saatchi, a globally influential art collector, is well known for helping the so-called YBAs, or young British artists, such as Damien Hirst and Tracey Emin, grow into stars of the world contemporary art scene.

The Saatchi Gallery only provided a small space for the exhibition last year, but its growing enthusiasm for the project came after the 2009 show titled “Moon Generation” beat expectations, said David Ciclitira, creator of Korean Eye.

The exhibition had been scheduled to run for two weeks, but it attracted 40,000 visitors and was ultimately extended to three months. By the end of that time, 250,000 people had come to view the art.

“It was a success amid adverse situations; each of the 30 artists who participated in last year’s show had no choice but to present only one piece of work, as the scale of the show was shrunken to a quarter of what was initially planned in the aftermath of the 2008 financial crisis,” said Lee Dae-hyung, who was the only curator of the 2009 show and is one of the six curators for the 2010 exhibition titled “Korean Eye: Fantastic Ordinary.”

“This year, 12 artists present about 30 pieces, two or three pieces for each with more space for each work,” he said.

Lee added that he and the other five members of the international curatorial board for this year’s show had picked artists who are less well known than the participants in last year’s exhibition but have great potential.

“Fantastic Ordinary” features not only the artists mentioned above but also Bae Chan-hyo, a male artist who in his photographs dresses up as ladies and men in European court dress in a humorous commentary on globalization, and Bae Joon-sung, who is known for his use of holograms to make his photos shift depending on the viewing angle.

Other participants include Gwon O-sang, who is well known for his sculptures of human figures covered with photos of themselves, and the sculptor Ji Yong-ho. popular at art fairs in Europe for his powerful animal sculptures made of tires.

Also among the participants are Hong Young-in, who uses both painting and embroidery in her woks; Kim Dong-yoo, who makes pop-art-like paintings but in a realistic style; Kim Hyun-soo, whose surreal sculptures depict cruel fairy tales; and the painter Park Eun-young, who features original creatures in her works.

Among the guests at the opening of the exhibition were Bianca Jagger, a well-known human rights activist and former actress, the ex-wife of rock star Mick Jagger, who said, when asked what she thought of the show, “It is just wonderful.” She added she was especially impressed by the female artists represented.

Including Hong, whose mixes of painting and embroidery appeared on the poster for the 2010 show, and Shin, four of the 12 participants are women.

“The exhibits of this year are as strong as those of last year,” SC First Chairman Miller said. The company expanded its financial support for the Korean Eye show tenfold from 2009 and plans to continue to sponsor the project through 2012.

Miller said that Korea is known for its traditional culture, but that its contemporary culture, especially the creations of the younger generation, is less well known internationally. “The shows of Korean contemporary art will be a channel to promote not only the art but also general Korean culture internationally,” he added. 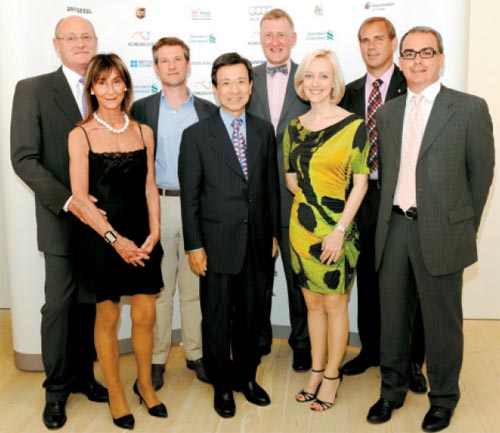 Emphasizing that the company’s support is not a one-off but a long-term commitment, Miller added, “The big exhibition at the Saatchi Gallery in 2012 will not be the end but the beginning. We are looking for fresh ideas to continue to promote Korean contemporary art internationally.”

To illustrate that pledge, SC installed a sculpture of a jaguar made of tires by Korean Eye participant Ji in the ground-floor lobby of its London office.

“The strengths of Korean contemporary artists are that their works are very diverse and they have good communication with the flow of international art scenes, while being fresh,” said Lee Ji-yoon, director of the SUUM Contemporary Art Project, which focuses on cultural engagement between Asia and Europe. She is also a member of the curatorial board for Fantastic Ordinary.

Hurst at Saatchi Gallery reiterated those points, and said that the gallery is focusing on living art by growing artists.

With the start of the 2010 Korean Eye show, the book “Korean Eye: Contemporary Korean Art” was released on the shelves of the Saatchi Gallery’s gift shop.

It introduces 75 emerging Korean artists including those who participated in the exhibitions this year and last, with high-quality photographs of their work. It was published by Skira, an Italian company famous for its art books.

“It will be the first major global work to promote Korean contemporary art in English,” said Korean Eye founder Ciclitira, who is also chairman of Parallel Media Group plc, an international sports and events company.

“When I visited Korea three and half years ago, I went to bookstores, as I am a big reader,” he said. “I looked for any book introducing local contemporary artists but found none. So I felt the necessity of such a book.”

Ciclitira and his wife, Serenella, who chairs the curatorial board for the 2010 Korean Eye show, are honorary fellows of the Royal College of Art.

The other members of the board are Johnson Chang, a Hong Kong-based curator and guest professor of China Art Academy in Hangzhou; Rodman Primack, former London chairman of the auction house Phillips de Pury & Company; and Amelie von Wedel, an art historian, curator and art consultant based in London.

The Korean Eye: Fantastic Ordinary exhibition will move to Singapore in October and to Seoul in November to coincide with the G-20 Summit.

“The show would easily appeal to the public in Singapore, as the art works are not too academic but are interesting and impressive,” said Geoffrey Eu, a journalist of the Singapore-based daily Business Times, at the opening ceremony.