Choi embracing change on the links once again

Choi embracing change on the links once again 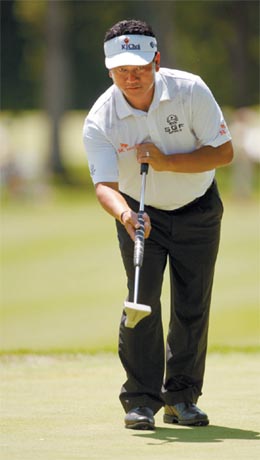 Choi Kyung-joo putts during the second round of the John Deere Classic at TPC Deere Run on July 9 in Silvis, Illinois. [AFP/YONHAP]

ST. ANDREWS, Scotland - Choi Kyung-joo has been walking the greens much longer than many of his peers. Yet the 40-year-old veteran golfer isn’t afraid of making drastic changes to his game, exemplifying a willingness to abandon deeply ingrained techniques and use new equipment.

Case in point: Choi recently switched to an unconventional new putter, which has been drawing a lot of attention at the 2010 British Open.

“I’ve never feared change. When I have a feel for something, I’ve been the first to try something new before anyone else,” Choi said after a practice round on the Old Course at St. Andrews. “This just might be the putter I stick with for the rest of my career.”

Choi has decided to use a 40-inch-long putter, the approximate length of most drivers and twice the weight of most putters, with a thick grip in the middle area of the shaft. He refers to it as the “Juan putter” after its inventor - and Choi’s longtime friend - Juan Elizondo. The veteran golfer also changed his putting stance. Choi faces the hole with his right hand on the middle grip of the putter and taps the ball with the triangular head of the club. According to Choi, the biggest advantage to using the Juan putter is that he faces the hole when hitting the ball, making it easier to focus on the line of the putt.

Having struggled with his putting game in recent times, Choi received the new putter roughly two weeks ago and started using it immediately.

Choi broke out the putter for the first time in competition at the John Deere Classic two weeks ago, which gave him an opportunity to test it out before the major championship in St. Andrews. He missed the cut but thinks the new club is helping him improve his putting game.

Choi’s unusual putting club and his odd putting stance have drawn laughter and scoffs from his peers. Choi, however, is indifferent to the reactions of others.

“I don’t care what others say about the change,” said Choi. “When I used a driver with a rectangular head, some people poked fun at me by saying the driver made sounds like tuna cans being cracked open, but I didn’t care. My new putting stance enables me to overcome such flaws.”

Choi has been paired with Bubba Watson of the United States, with a tee off time set for 10:53 a.m. today, Korea time. In addition to Choi, seven other Korean golfers will compete in the 2010 British Open. As the oldest of the four major championships, the British Open is held on the Old Course at St. Andrews, Scotland, every five years. Tiger Woods won the last two there, in 2000 and 2005.