Poster in Pyongyang recalls the Cheonan

Poster in Pyongyang recalls the Cheonan 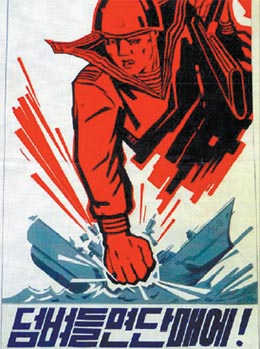 “Ready to crush any attack with a single blow!” [Radio Free Asia]

A poster spotted in Pyongyang by a visiting Chinese businessman seems to admit North Korea’s role in the sinking of the South Korean naval ship Cheonan in March, according to Radio Free Asia yesterday.

The U.S.-based media outlet reported on its Korean Web site that the poster shows a fully armed soldier cutting a corvette similar to the Cheonan in half with his bare fist. Below the image is the phrase “Deom-byeo-deul-myeon Dan-mae-e!” (“Ready to crush any attack with a single blow!”).

The Cheonan was split in two pieces on March 26 by a torpedo attack from a North Korean submarine, according to a South Korean-led multinational investigating team. Forty-six South Korean sailors were killed.

Radio Free Asia based its report on an interview with the businessman, who took the photo of the poster on a recent trip to North Korea. The poster is shown on the RFA Korean Web site. The RFA did not specify the date the photo was taken but, citing unnamed sources, said it was likely the poster was made after the Cheonan sinking to encourage military heroism among North Korean soldiers.

The RFA quoted the Chinese businessman as saying, “Officials in North Korea have claimed that the South Korean government’s accusation of North Korea as the culprit in the Cheonan incident is a false charge, but the propaganda poster showing the breaking of a ship in two pieces seems to conflict with their claim.”

The RFA also cited a North Korean defector who said a rumor circulated within the North Korean military after the Cheonan sinking that “the heroic navy landed a blow.”

Despite an indirect condemnation by the UN Security Council Friday, North Korea is reiterating its claim of innocence. The state-run Korean Central News Agency reported Tuesday that the country remains resolute in digging out the truth behind the Cheonan incident.