Cute, cuddly on the big screen

Cute, cuddly on the big screen 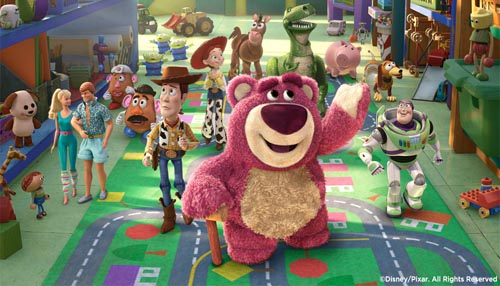 In “Toy Story 3,” the lovable characters from the series are accidently sent to a day care center, where they must band together to escape the deceivingly vicious Hugging Bear (center). Provided by Disney/Pixar


Over the past few years, family films have all but disappeared from local theaters during the summer months, as audiences increasingly clamor to see big-budget movies featuring sex and violence.

But this summer will hark back to the days of yore, with three upcoming family films hoping to prove that good-natured laughs and touching story lines that feature animals can trump blood and gore any day.

“It appears that we’ll see more family films this year than last,” said Lee Yoon-hee, an official with the film marketing company Vidan, which is promoting the upcoming children’s movie “Maumi 2.” “‘Shrek 3’ has already been released, and a host of others are on the way,” Lee said.

Maumi 2 will be the first to debut among the trio of family films slated for release over the new few weeks. The movie, which hits theaters on July 21, is a sequel to 2006 film “Hearty Paws,” a tear-jerking tale of an 11-year-old boy who is separated from his loyal dog after becoming orphaned when his mom leaves home.

Dal-yi, the 10-year-old female Labrador Retriever from the first film, again stars in the sequel as Maumi.

Hearty Paws attracted 1.2 million moviegoers in 2006 but was a bit dark for a family film, featuring some violent scenes in which gangs kidnap children and teach them how to beg on the street. The sequel, however, is more family friendly - focusing on two bumbling villains who try to kidnap and stuff Maumi’s puppy to hide a stolen diamond.

“This film is certainly lighter than the first,” Sung Dong-il, who plays one of the villains in Maumi 2, said during a recent press conference in central Seoul. 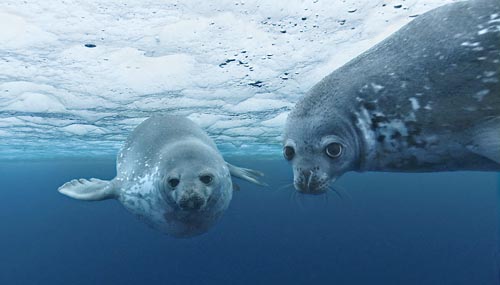 The documentary “Oceans” follows the lives of about 100 marine animals over the past seven years. Provided by Uni Korea

Others involved in the film said Dal-yi was treated like any other human movie star, receiving special treatment during filming.

“Dal-yi had her own chair, and a stand-in was brought in for tough scenes where she had to run fast,” said Kim Zong-kwon, Dal-yi’s trainer. “She was also given special nutritious meals.”

Next up on the list of family-friendly films is the French documentary “Oceans,” slated to open on July 29.

The film took seven years to make and tallied up production costs of $80 million - a remarkable sum for a documentary.

Following the lives of roughly 100 marine fish and animals in the deep sea, it sheds light on a part of the world few people ever see.

When Oceans was released in France, some reviewers lauded its spectacular visuals, saying that they are far more beautiful than virtual worlds created by computer graphics.

In one notable scene, hundreds of dolphins surround a cameraman, making for a breathtaking sight.

The biggest buzz in the family genre this summer is tied to “Toy Story 3,” the latest installment of one of the most successful children’s film franchises of all time.

The movie, to be released here on Aug. 5, features the same cast of characters from the previous titles, including Woody, Buzz Lightyear and Mr. and Mrs. Potato Head.

It’s been 11 years since Toy Story 2 hit the big screen, but the third films shows that Pixar is still at the top of its game, featuring a compelling story, engaging characters and eye-popping animation.

The film starts as Andy - the toys’ owner - sets off for college. His toys are bound for the attic, but they wind up at a day care center by accident. The cast of characters then embarks on an adventure to get back home and escape from the vicious Hugging Bear, who rules the day care center.

The movie touches upon relationships, love and trust and boasts more than three decades of famous toys, including Barbie and Ken.